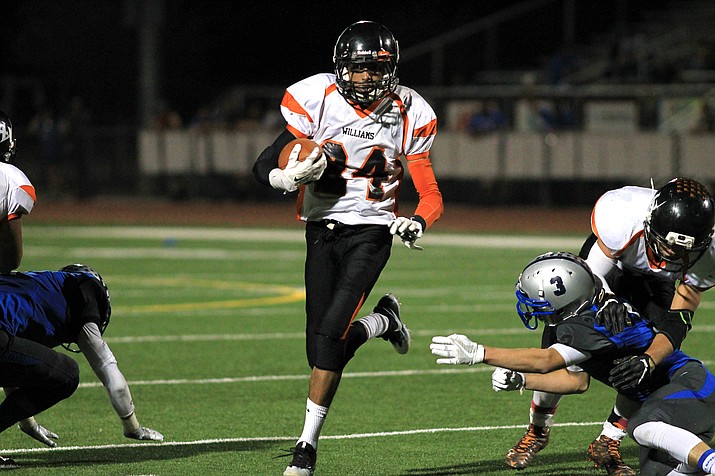 Viking Daniel Lopez breaks away from the Sultan's defense enroute to a touchdown during the 1A State Championship game Nov. 12.

WILLIAMS, Ariz. –Amidst a sea of orange,

Viking Martin Soria hands off to running back Tyler Smith during the game with Bagdad.

Viking football players were treated to a community sendoff Saturday morning as city police and firefighters escorted the Viking bus through downtown Williams as dozens of fans and business owners lined the streets to show their support on their way to the 1A State Tournament Nov. 12.

Hundreds of fans followed the team to Maricopa to offer support as the Vikings took on the number one seed Bagdad Sultans.

Coming off the 42-40 overtime win over Superior, the Vikings knew they were up against a powerhouse team facing the Sultans (11-0), who delivered the Vikings their only loss this season and beat every team they played this year by at least 24.

Viking Chance Pearson holds on to a Bagdad runner as Zack Perkins comes to help.

Martin Soria and Tyler Smith, keeping the Vikings offense to only 150 yards for the game.

Offensively, Bagdad brothers Israel and Benjamin Loveall put on a show, with Israel throwing six touchdown passes and Benjamin making a 68-yard touchdown run in the 60-6 rout over the Vikings.

Fans got a taste of what Bagdad brought to the game early in the first quarter as the Sultans stopped the Vikings on the 7-yard line on a fourth down and turned around and scored a 90-yard touchdown on the second play of their first drive.

The Vikings kept fighting but were stopped with each drive. They kept the Sultans to just eight points at the end of the first quarter.

A series of turnovers hurt the Vikings at the beginning of the second quarter, allowing the Sultans to capitalize and score a second touchdown with a 12-yard pass to move the score 16-0.

A 35-yard run by Soria set up running back Daniel Lopez, who brought the Vikings back up to 16-6 with a 25-yard touchdown run.

Momentum on the field began to change, however, as the Sultans scored two quick touchdowns before half-time, widening the margin to 30-6.

“In eight-man, if you lose your focus for a minute things can change in a hurry,” said Vikings coach Jeff Brownlee.

The Vikings came out in the second half fired-up to the cheers of the devoted fans, but the Sultans brought the heat and pulled in three touchdowns in the third quarter and two more in the fourth before time ran out on the Vikings.

Brownlee said Bagdad has a talented team and they effectively shut down the Vikings running game.

Bagdad has been a force in eight-man football, making it to the semifinals and finals every year since 2012. Bagdad won the 2013 state championship.

The Vikings are in their second year of 8-man football and made it to the first round in 2015.

The fan support was amazing this year,” Brownlee said. “We had alumni and a strong fan base this season which was really encouraging. The future is really bright for us.”