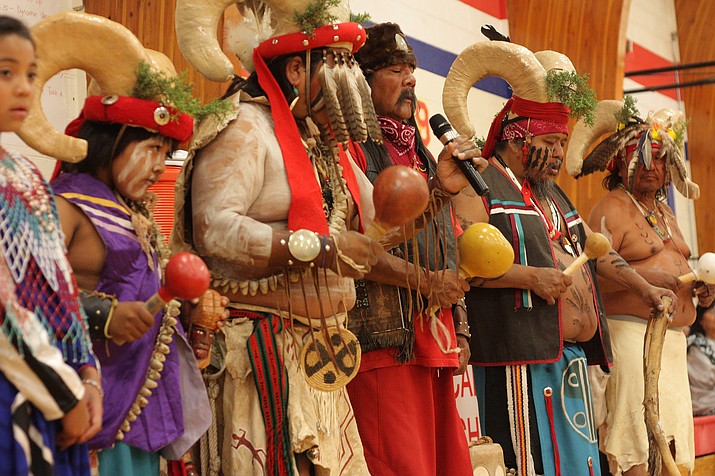 The Havasupai Guardians of the Grand Canyon Ram Dancers dressed in traditional dress representing the bighorn sheep that wander their ancestral lands. 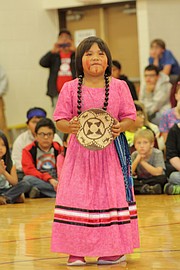 GRAND CANYON, Ariz. — Passed down by elders for generations, the cultural dances, music and art of Native American tribes still resonate for their people.

Representatives from Apache, Havasupai, Hopi and Navajo tribes came together at Grand Canyon National Park Nov. 9 to share their tribal traditions with locals and visitors alike.

Dancers and musicians took the stage at Shrine of the Ages in a flurry of bright color and movement. Each tribe’s unique presentation was an expression of joy, prayer, hope, or all three at once.

One of the elder ram dancers told the story of one of their own tribal warriors, a young man who grew tired of life in his village and traveled far into the canyon. The young warrior was gone for many days, he said, and the people of the village got worried and went looking for him. They found him in a cave lying next to a bighorn sheep, and they brought him back to the village. The young man was not content, though, and he left again many times, only to be found in the same place, among the bighorn sheep.

“They noticed he began changing,” said the storyteller, “his hair was braided and coiled like the horns of the ram and he now had fur and hooves. When he saw the villagers coming, he ran away with the herd, leaving the people behind. He was satisfied with what he had become.”

According to the story, he lived the rest of his life in the wilderness, becoming a guardian of the Grand Canyon. Eventually, however, he longed for the things he had left behind, and he began to sing songs of all that was taken from him in his transformation.

“The Havasupai people, when we sing the song and dance the ram dance, we are saying that we are going to regain everything that was taken from us,” he said. “It is a hope that everything we lost will be brought back one of these days.”

The Ram Dancers then offered a prayer honoring soldiers and veterans.

An expression of prayer through song and dance is sacred to many tribes, including the Navajo. Dressed in traditional Navajo regalia and adorned with eagle feathers, Miss White Mountain Apache Katerri Dale performed an Eagle Dance in honor of her late sister. Sacred to the Apaches, eagles deliver messages of prayer to the Creator on behalf of the people.

Dancing, however, is not just for elders.

Hopi youth performed the butterfly dance, complete with colorful ceremonial dress and a kopatsoki, an elaborate, colorful headdress. According to Gloria Lomahaftewa, a Hopi of the Cloud/Water Clan and former curator at the Heard Museum and Museum of Northern Arizona, young girls and boys come together in late summer or early fall to perform the social dance. Young, unmarried Hopi girls and a boy relative from their clan are permitted to dance. During the two-day event, the young participants will learn all 32 songs and dances that will be performed by men of the village.

A departure from the childlike joy and elegance of other dances, the Apache Crown Dancers build a frenetic energy with powerful movements and jingling bells.

Hedy Kelewood, who oversees Apache language and cultural programs, explained the significance of the performance. The dancers represent Ga’an, the spiritual ancestors of the Apache. Ga’an dancers invoke the mountain spirits to ask for blessings or to ward off evil. Four dancers are painted black and adorned with white body paint to symbolize the four cardinal directions, while a fifth dancer is painted light gray. This dancer serves as a jester, of sorts, to communicate with the other spirits.

While the dances are an entertaining and educational experience for visitors, offering a glimpse into the beliefs and legends of a particular tribe, many Native American ceremonial dances are deeply sacred and not performed in their entirety for those outside the tribe.