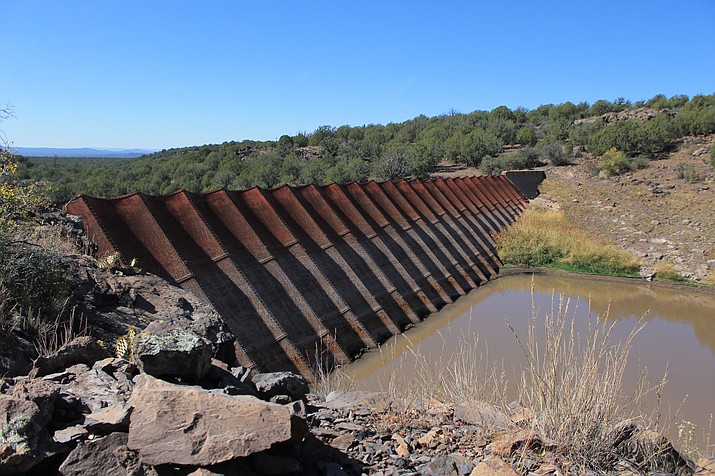 The Ash Fork - Bainbridge Steel Dam, constructed in 1898, is one of only three large steel dams ever built in the United States. The dam was used by the Atchison, Topeka and Santa Fe Railroad as water storage for steam trains.

A hand-forged bolt on the dam.

WILLIAMS, Ariz. — Most people traveling through northern Arizona are drawn to the beauty of the pine forests and the magnificent Grand Canyon. Many come to experience the history of Route 66 and the towns that have captured the nostalgia. But to those who dig deeper, they will find hidden among the sagebrush and pinyon pines remnants of a significant railroad operation that was a key to opening the door to the arid west over 100 years ago.

Just two miles off Interstate 40, tucked into Johnson Canyon between Ash Fork and Williams, rests the first of only three large steel dams ever constructed in the United States. The Ash Fork — Bainbridge Steel Dam is a monolith structure that represents the importance of the railroad in the development of the west.

The steel dam was designed by Francis. H. Bainbridge, a civil engineer working for Atchison, Topeka, and Santa Fe (AT&SF) railway, and built in 1898 by the Wisconsin Bridge and Iron company for the railway. It was constructed off-site, shipped to the location by train for erection and hauled to the site by wagons and mule teams, according to Kaibab National Forest Heritage and Tribal Program Manager Margaret Hangan. It provided 36 million gallons of water storage for the railroad’s steam engines as they crossed the dry southwest as well as supplied the town of Ash Fork with water.

“The track was just to the north of here and they laid track into here,” Hangan said on a hike to the dam. “They had a side route in here.”

The town of Ash Fork was a watering place for the AT&SF railway’s east-west line and a terminus for the Santa Fe, Prescott and Phoenix railway. The natural water supply was insufficient for these demands and the company added the Ash Fork Steel Dam to the series of reservoirs it was creating in Arizona. Until the dam was built, the railroad was forced to haul water from Williams, a distance of 23 miles or even from Bellemont, 45 miles away. Since the need was for 90,000 gallons a day, the advantages of a nearby reservoir was obvious.

During the Steam Era, U.S. railroads used enormous quantities of water for locomotives. It is estimated the railroads consumed approximately 80 billion cubic feet of water each year when steam locomotives ruled the rails.

The railroad originally connected Atchison and Topeka, Kansas, with Santa Fe, New Mexico in the Southwest. It eventually added Santa Fe to the route. After completing its initial main line, the railroad quickly expanded westward and eastward and reached Needles, California in 1883 and Los Angeles in 1885.

Fay Hume attends the dedication of the Stone to Steel trail in the summer of 2015.

Dealing with water in the desert was typically handled one of two ways. Contrary to popular belief, locomotives didn’t have to stop as frequently as you might expect. On average, locomotives would stop about every 90 miles or so. Sooner if they were working hard grades.

According to Hangan, evidence at the site shows that not only did the steam trains get water from the dams but the employees and families recreated at the area too.

“It looks like locals and families of the employees would come here to take advantage of a water opportunity,” Hangan said.

Hangan said there is artifactual evidence such as rock fences and historic garbage that points to a lot of activity in the area in the early 1900s.

The dam is 46 feet high and 184 feet long and creates a reservoir with a capacity of 36 million gallons. The dam has no spillway, since it was designed to allow a 6-foot overflow to pour over its crest. It consists of 24 curved 3/8 inch steel plates, with alternate loose and ridged panels to compensate for a temperature range from 104 degrees to minus four degrees, that give the dam a scalloped look. There is an apron along the downstream edge of the crest to allow overflow water to clear the dam. A pipe ran from the bottom of the dam for several miles down the canyon to the Santa Fe station in Ash Fork. A soft, open hearth steel was used, except for the rivets which are exposed to water and are wrought iron. The weight of the steel in the dam is estimated at 400,000 lbs.

Steel dams typically have thin steel plates that contact the body of water, with a framework of steel behind them transmitting the load to the ground. The plates are slanted upwards in the direction of water flow, so the weight of the water puts compressive forces on the girders holding the plates up. This transmits force to the ground without the bending movement that a vertical wall of plates would entail. It was believed at the time that these dams could be constructed faster and more cheaply than masonry dams. The Ash-Fork Bainbridge dam cost $46,000.

The other two U.S. steel dams are the Redridge Dam in Michigan, built in 1901 and the Hauser Lake Dam in Montana, built in 1906. The Hauser Dam failed after one year of service because of leakage through the steel which undermined the foundation. The Redridge Dam is listed on the National Register of Historic Places.

The longevity of the Ash Fork and Redridge dams show the design soundness as well as durability and low maintenance costs. However, no new steel dam was built after 1910.

The Ash Fork steel dam still holds water today but only provides water for water for wildlife, livestock and recreation.

Stone Dam also lies within Johnson Canyon just upstream from Steel Dam. It was constructed for the Atchison, Topeka, and Santa Fe Railway in 1902 and is made of large sandstone blocks, each weighing a ton or more. The stones were cut to size at the dam location during construction. The dam is 50 feet high and 600 feet wide. Flakes of red sandstone can still be seen near the railroad spur. Stone Dam served as a backup for Steel Dam, with water being released to fill Steel Dam when its water level was low.

Stone Dam is frequently visited more than Steel Dam since it often has a higher water level and is regularly stocked with bass and other fish for anglers.

In 2015, the Stone to Steel Dam trail was completed by the Ash Fork Development Association, Kaibab National Forest, Boy Scouts and many other volunteers. Stone benches were donated by local quarries to place along the trail and steel signs were made and erected by the Ash Fork High School welding class.

The quickest route to the dams is to take I-40 to the Welch Road exit. Head north a few hundred feet and turn right onto Forest Road 6 for .5 miles. Where Forest Road 6 ends, turn left on Old Route 66 and continue for two miles. After the cattle guard turn right at the next road. This road may require four-wheel drive and winds down approximately .5 miles to Stone Dam and the trailhead for Steel Dam.