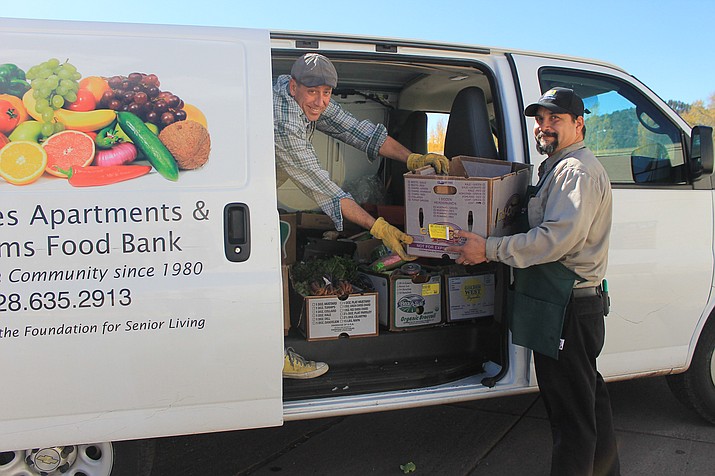 Williams Food Bank Director Guy Mikkelsen is hoping every family in Williams can put these items on the table this Thanksgiving and is asking the public for help.

Williams Food Bank works year round to ensure residents have food on the table. With Thanksgiving now less than a month away, the Williams Food Bank is working even harder to make sure those who are in need can celebrate the holiday in style

According to Mikkelsen, this year is going to be particularly difficult for the food bank to gather enough food to get people through the holidays. He said prior to its dismantling, the Williams Chamber of Commerce would host a holiday mixer for the business community which would raise much needed funds for turkeys and holiday trimmings.

“We aren’t going to be able to mingle with the business owners who always support us,” Mikkelsen said. “We’re going to have to go out and reach out to them.”

The mission of the Williams Food Bank is to assist families in need with food, toiletries and other groceries throughout the year. The food bank has been a community asset for over 30 years and has been under the direction of Guy Mikkelsen for the last 15.

In 2016 the Williams Food Bank distributed over 382,000 pounds of food to needy families in the area.

Of the 139,000 residents in Coconino County, 23 percent live in poverty. Despite a $48,000 median income, much of the money Coconino residents make goes toward housing and other expenses leaving little money for food. That is where the food bank steps in to help hungry families in the area.

Research has found that what previously was an emergency network to provide food to people in short-term need has become a regular coping mechanism for people use to access enough food for their families.”

“We consistently serve around 250 families per month,” Mikkelsen said. “During the Thanksgiving month that number goes up to and we serve about 300 families.

Mikkelsen said the holidays are especially tough for some families. He said there is an expectation to have a grand Thanksgiving meal, but there is also the concern about feeding the family for the rest of the month.

“You’ve got to feed the family all the other days of the week and it’s not all going to be turkey,” Mikkelsen said.

Mikkelsen said the money he has gathered throughout the year will go to buying turkeys at a discount from Shamrock Foods. He said he looks for donations from stores and the community for the rest of the holiday trimmings.

Mikkelsen said there are many local stores who contribute to the food bank every week. He said the Williams Safeway donates fresh vegetables, dairy and other staples daily to the organization.

Visitors to Williams Food Bank can use a grocery cart as they shop for food items.

“We get about 25,000 pounds of food per month from St. Mary’s,” Mikkelsen said. “But we have other supporters like Hickman Farms who gave us 900 dozen eggs last month.

Mikkelsen said there are several ways to help the Williams Food Bank this holiday season. He said Dollar General has a permanent donation box set up where people can purchase items right in the store and donate or they can bring items from home.

“The best food we can provide people is the nonperishable food that you find in everyone’s pantry,” Mikkelsen said. “We all have food that we are not going to eat, it’s a great time to clean out the pantry.”

Besides Dollar General, Williams Elementary-Middle School will be accepting holiday food bank donations. Mikkelsen encourages parents to send canned and boxed food for donation with their children to the school.

Safeway is also helping the food bank by promoting Turkey Bucks this fall. Customers can purchase $1, $5, or $10 coupons that will be used to purchase food for the Food Bank. Customers can also purchase a Hunger Bag at checkout that that is full of holiday trimmings and will be placed in a donation box at the store.

The Food Bank also accepts monetary donations that Mikkelsen uses to purchase turkeys. The Food Bank gave out $4,000 worth of turkeys last year.

Residents can visit the Food Bank once each month to collect supplies.

Mikkelsen said volunteers are always needed at the food bank. Anyone interested can come to the food bank around 10:30 a.m. daily.

Anyone interested in donating food or money can contact Mikkelsen at (928) 635-2913 or drop by the Food Bank at 200 S. 9th St. in Williams. All donations are tax deductible.