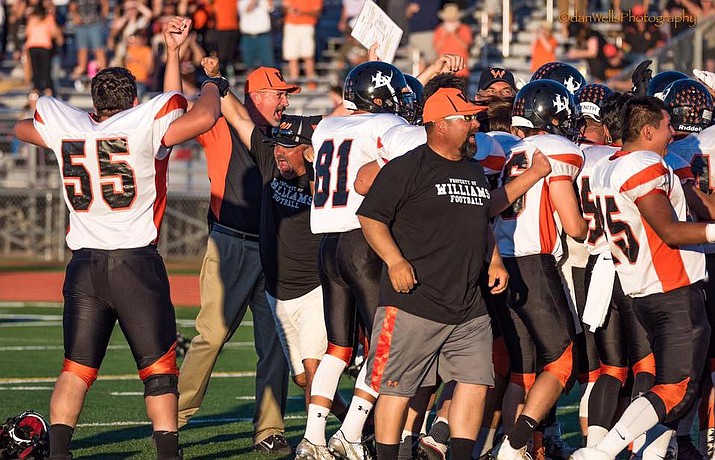 Vikings coaches and players celebrate after the semifinal win against the Superior Panthers Nov. 5 at Maricopa High School.

WILLIAMS, Ariz. — If you have endured decades of reaching for what seems to be the unattainable and coming up short, when you do finally make it to a state championship game, it should be memorable along the way.

The Williams Vikings did just that, shattering their 23-year run for a state championship game in epic fashion: a 42-40, overtime victory over the Superior Panthers Nov. 5 at Maricopa High School.

When the Vikings rallied in the fourth quarter, — coming from a 34-20 deficit to tie it up with just 2:49 left in the game, the Vikings found a way to brush off the cobwebs of playoffs past.

With both teams exhausted following two hours of play, the Vikings and Panthers entered overtime running only on fumes. Following AIA rules, each team was allowed one possession to score as many points as possible from the 10-yard line.

Vikings wide receiver Daniel Lopez scores his first of two touchdowns for the Vikings during the semifinal game with Superior.

The Vikings took the ball first in the overtime period with running back Tyler Smith carrying the ball to the 5-yard line. On second down and goal, quarterback Martin Soria ran the ball the remaining 5 yards, reaching over the goal line to secure a touchdown for the Vikings. Soria then connected with Daniel Lopez for the 2-point conversion putting the Vikings on top 42-34.

The Panthers had their chance to even the score when quarterback Nicolaus Cruz connected with offensive lineman Steven Ybarra on the first play of their possession to move within two points of the Vikings.

With the game on the line, the Viking win came down to one play as Cruz executed a perfect pass to Panther Marcos Bueno, which looked to be an easy catch for the 2-point conversion, but cornerback Soria shattered that plan as he batted the ball away from the wide receiver and secured the win for the Vikings. Fans, coaches and players erupted in cheers and celebrated at the goal line as the Vikings advanced to the 1A State Championship game Nov. 12 with Bagdad.

“We’ve been out of it for 23 years and it’s good to get Williams High School football program back into the championship game,” said Williams head coach Jeff Brownlee after the game.

The Vikings had an 8-1 record and were seeded third in 1A. Their only loss came from 56-20 rout by Bagdad early in the season. They finished the 2015 season with a 5-4 record and were cut short in the first round of the state playoffs with a loss to Mogollon 14-12.

The roller coaster of the Vikings-Panthers game began with a strong first half by the Panthers, and ended with a scrappy Viking team pulling even at the close of the fourth quarter.

Vikings quarterback Martin Soria throws a pass over the hands of a Superior lineman.

The Vikings won the initial coin toss and drove the ball 60-yards to score on their first possession. Freshman Chance Pearson returned the kickoff to the 38-yard line, Soria then ran the ball to the Panther’s 40-yard line, Francisco Ortiz, Tyler Smith and Soria took it for additional yards before Daniel Lopez carried it over the goal line for the first Viking touchdown of the game. The 2-point conversion pass fell incomplete.

With six minutes still to play in the first quarter, Cruz and Bueno worked the ball back to Vikings territory, where Cruz broke through the Vikings line and made a 38-yard run to the goal line to even the score 6-6. Bueno was brought down by Soria at the 3-yard line and missed the 2-point conversion.

The next drive of the game saw the pendulum swing towards the Panthers when the Vikings were called for holding and Bueno intercepted Soria. It was the first turnover of the game with 4:58 left in the first quarter.

The Panthers capitalized on several Viking errors and Austin Navarette caught a 38-yard pass and Galindo made an 8-yard run for the touchdown. They made the 2-point conversion and moved the lead 14-6.

“We’ve told the kids all season that in 8-man football anything can change and it can change fast,” Brownlee said about the turnovers. “We just kept with our game plan.”

The Vikings defense kept the Panthers from scoring on their next drive. Pearson and other Vikings defenders held Panther running back Edgar Galindo to just a few yards and the ball returned to the Vikings.

On the next drive, Smith made a substantial gain with a 36-yard run. Smith and Ortiz continued to push downfield with Smith finally plowing into the end zone for his first touchdown of the game. Soria followed up with a 2-point conversion run to even the score at 14.

The Panthers quickly moved the ball when Cruz passed to Dominic Parea for a 31-yard pass-play. Bueno followed it up with 14-yard pass for a TD that brought the score 20-14.

“You have to give credit to Superior for their passing game,” Brownlee said. “It was much better than we anticipated, their receivers and quarterback are very athletic.”

Despite the Panther momentum, Ortiz put the stop on the Panthers 2-point conversion.

On the next Viking possession, it only took 40 seconds for the Vikings to score with Lopez making a 17-yard run followed by a trick play that allowed

him to score and tie the game at 20. Soria attempted a pass for the 2-point conversion, but it was knocked down.

Vikings wide receiver Zack Perkins pulls down a pass in the semifinal game.

“We made two goal line stances against a very good offensive football team,” Brownlee said. “We were able to hold them and get the ball back.”

With 1:12 left in the half, Superior scored their fourth TD but was kept from extra points by Chance Pearson and Ethan Johnson. Superior finished up 26-20 at the end of the half.

Returning from the half, the Vikings defense kept the Panthers from scoring on their next drive. On the Vikings possession, Soria made passes to Perkins and Ortiz to get the ball to the 15-yard line but a Viking fumble returned it to the Panthers.

Superior ran the ball downfield quickly on a 98-yard drive with Galindo scoring on a screen pass and Cruise following with a 2-point conversion run. Superior was up 34-20.

Vikings Francisco Ortiz celebrates a touchdown during the game with Superior.

Things began looking dire for the Vikings and talk began of the Panthers going to the championship game, but the Vikings weren’t done yet.

At the end of the third quarter Soria got the Vikings going with several big runs and solid passes to Perkins and Ortiz. They set up Cruz Pearson who slid in for another Vikings touchdown. A Soria – Perkins pass brought the score 34-28.

The Panthers worked their way back but a fumble by Bueno gave the Vikings the ball back at the 35-yard line. Ortiz then rushed to the 22-yard line and Perkins got a 20-yard run which allowed Soria to plunge over the goal line to even the score at 34.

The conversion pass was incomplete.

Excitement mounted as the Panthers rallied in the last drive of the fourth quarter and brought the ball down to the Viking 8-yard line. But the Vikings defense made their second goal line stance of the day by holding the Panthers on the next four downs while Smith blocked a pass to Galindo to send the game into overtime where the Vikings won 42-40.

Viking Martin Soria looks to pass during the game with Superior.

“The kids were excited. We had kids crying and they were just elated with happiness,” Brownlee said. “I’m very happy for our kids and the success we have had all year. Now we get to go play Bagdad. The first time we played them we weren’t at 100 percent, but now we are.”

Brownlee said the support of the fans who came to Maricopa was essential for the success of the football team and he hopes even more will turn out for the championship game.

“We had tremendous crowd support, our stands were full, our fans were loud,” he said. “The kids saw it and I think it helped motivate them. A lot of good things happened for Williams that day.”