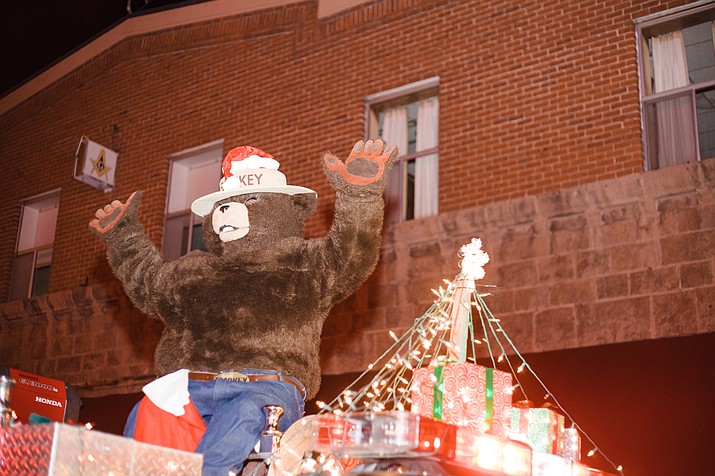 Smokey the Bear rides on a float in the 2014 Christmas Parade in Williams.

WILLIAMS, Ariz. — While many Williams residents have barely made a dent in the Halloween candy and have yet to stow away their costumes, many others are already gearing up for the Christmas season.

The community formerly relied on the Williams Chamber of Commerce to organize events for holidays, but since its dismantling, a small group of volunteers has stepped up to carry forth the traditional holiday parade and even begin a new tradition, an old-fashioned Christmas Nativity Pageant.

“It just has all come about organically,” said pageant organizer Kerry-Lynn Moede.

The holiday season kicks-off with an annual Christmas parade Nov. 26 at 6:30 p.m. Volunteers are hosting signups and organizing workers to facilitate the event. This year’s theme is “The Story of Christmas.”

The parade will start at the west end of town and proceed through the downtown area. Announcers and judges will be posted at Second Street and Route 66.

Moede said the Christmas Nativity Pageant takes place Dec. 23 and said the idea came from Cosette Riggs, the pastor at Holiness Congregational Church. She said Riggs approached her and the idea

The first organizational meeting was held Oct. 18 and Moede said she was overwhelmed with the response. She said 70 people have already volunteered to participate in the program.

resources so we thought maybe we could do a project together,” she said.

Moede said she also believes the pageant might attract some Williams residents and visitors who do not attend any local churches or be involved with any groups.

Moede said the pageant is Biblically based and won’t involve Santa Claus, reindeer or anything that differs from the Christmas story. The group is organizing volunteers for actors, singers, musicians and technicians.

A band is being organized and had its first meeting Nov. 7 under the direction of Williams Unified School District band instructor Beverly Stearns. The band will have future practices that will be posted. A choir is also being organized and will join with the band at later practices.

“We already have soloists, we have duets, and we have a trio,” Moede said. “I’m amazed at the musicians we have in this town.”

Moede said the group is continuing to look for volunteers. She said the group needs children for parts in the play including, angels, shepherds and sheep. She also needs people to oversee portions of the pageant such as organizing the bakers and directing the children.

“We have a cookie baking crew who will bake cookies and serve cocoa,” she said. “But we need someone to organize it.”

Moede said many local businesses and organizations have stepped up to help already. She said Circle K is providing cocoa, the Route 66 Zipline is helping with the star and Old Trails True Value is donating materials and building the stage sets.

She said the Williams Fire Department is going to provide gas heaters and covered fire pits to keep participants and audience members warm.

“We know it’s going to be cold so we want people to know to dress warmly,” she said. “The rec center has offered to stay open and be a warming hut if needed.”

Moede said the pageant is free to the public and hopes residents and visitors will turn out to watch.

Anyone interested in volunteering or participating in the parade can pick up an application at the city of Williams building. More information can be found by calling (928) 635-4451 ext. 200.