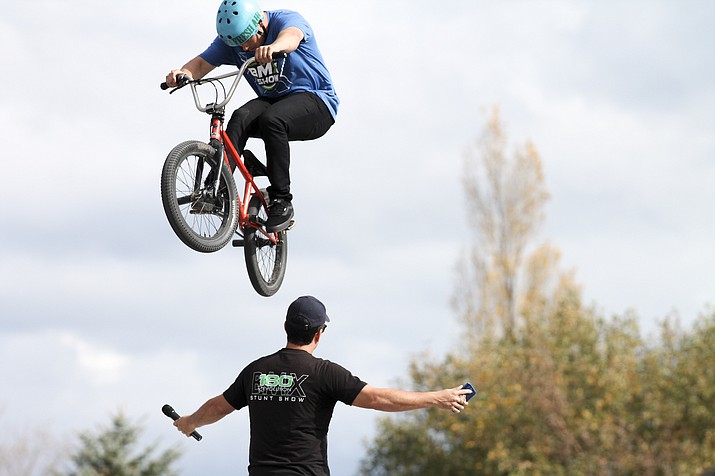 A BMX rider takes to the air during a performance and anti-drug message at Williams Elementary-Middle School Nov. 3.

WILLIAMS, Ariz. — Students at Williams Elementary-Middle School were treated to a BMX stunt show to end Red Ribbon Week, a campaign to educate school-aged children about the dangers of drug and alcohol use and to encourage participation in drug-prevention activities.

Wheels of Freestyle delivered a powerful motivational school assembly to Williams youth Nov. 3 in front of Williams Elementary-Middle School (WEMS). The thrilling show included aerial tricks and BMX stunts that captured the students’ attention while the announcer spoke of the dangers of drugs and alcohol.

The 20-year old program has taken teams to schools around the country delivery an anti-drug message. It first began as a bike safety program that evolved into an education program about the harms of drugs and alcohol.

According to group manager Luis Hoyos, the show shares five messages to children: living drug free, living your dreams, being motivated, respecting others and staying in school.

The school held an earlier assembly with the same funding earlier this year. The program took place after a regular school day and provided families with age-appropriate substance abuse education and the opportunity to develop a family substance abuse prevention plan.

Middle school students take pictures and video of the Wheels of Freestyle BMX riders during their Nov. 3 performance.

The National Family Partnership organized the first Nationwide Red Ribbon Campaign. In response to the murder of DEA Agent Enrique Camarena, angry parents and youth in communities across the country began wearing red ribbons as a symbol of their commitment to raise awareness of the killing and destruction cause by drugs in America.

In honor of Camarena’s memory and his battle against illegal drugs, friends and neighbors began to wear red badges of satin. Parents, tired of the destruction of alcohol and other drugs, began forming coalitions. Some of these new coalitions took Camarena as their model and embraced his belief that one person can make a difference. These coalitions also adopted the symbol of Camarena’s memory, the red ribbon.

The Red Ribbon serves as a catalyst to mobilize communities to educate youth and encourage participation in drug prevention activities. Since that time, the campaign has reached millions of U.S. children and families.