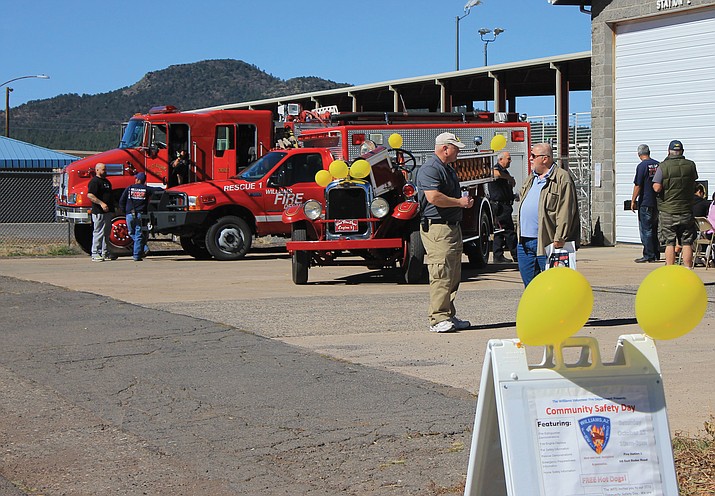 A CodeRED system by the city of Williams and Coconino County notifies residents of disasters and other emergencies. Right: Williams residents come together for a community safety event Oct. 22.

WILLIAMS, Ariz. — The city of Williams has entered an agreement with Coconino County to participate in the CodeRED emergency notification system.

CodeRED is a high speed notification system designed to notify people in of emergency situations within minutes. It is used by communities and agencies around the United States to inform communities of missing children, wildfires, tornadoes, severe weather, hurricanes, evacuations and other catastrophic situations via telephone, text, email, social media or a special smartphone app.

“Every community is responsible for emergency planning,” said Williams City Manager Skylor Miller. “(We need to) have proper training, be able to respond disaster situations, hazardous situations and other incidents. This is giving us more tools so that we can be more prepared.”

Miller said there are multiple ways to interact with CodeRED. He said messages can be forced out into the community in ways similar to the widely known Amber Alerts.

According to the CodeRED website, when a life threatening event impacts a community an alert can be launched in a few easy steps. Authorized users log in to the CodeRED system and select exactly who should receive the message. An entire city or state can be selected, specific groups or the system can select specific geographical locations using targeting tools.

“Some things we can force out, if your cell phone is within a geographic area, we draw a map and it pushes it out,” Miller said.

Miller said residents will have the option to sign up for a subscription and pick the level of service they are interested in.

“So if we have a water main we are working on, we’ll tell people the water is going off for a period of time,” Miller said. “We had a power outage on Garland Prairie last night for maintenance and we could have pushed out that information to residents ahead of time. We do have our hangers now, but it’s just another layer.”

Residents may also opt out of the CodeRED system.

“We can forcibly push that out if it’s a disaster situation,” Miller said. “We can override that for emergency information. If you don’t want anyone to contact you ever, than the only time you will get anything from CodeRED will be similar to Amber Alerts”

Miller said the CodeRED system is just one component of an emergency response plan the city has created in cooperation with Coconino County Emergency Management.

“We really need tighter ties to our county emergency management,” Miller said. “Keeping our emergency plans up to date is critical and they (the county) have the resources to help us do that.”

Miller said city staff, along with the police and fire departments, has been discussing upgrading the emergency management plans for the city. The discussion included tying into county level plans.

“We don’t want to be in conflict with them,” Miller said. “If an incident starts here and gets bigger and becomes a county situation, that situation could scale up and as long as those plans are consistent with each other you can have an efficient and successful response to the situation.”

“Our emergency plans should include incidents with fire, water issues, or blizzards,” Miller said. “We really have to cover the full gamut of things that we may face.”

Miller said the key is to be prepared and the agreement and CodeRED program will give the city more tools to do that.

“Forest fires are a perfect example,” Miller said. “It could start in Williams and spread. There’s going to be a local response, a county response and we are going to have cooperation with the U.S. Forest Service, of course, so that emergency plans just solidify our response to that. We have a game plan.”

“Once we have these plans on paper, we can do exercises based on them. Find out what works and what doesn’t. We can tweak the plan,” he said. “We’re not just winging it and that’s what it comes down to.”

“That gets us into the CodeRED subscription and the rest of that goes toward the partnership,” Miller said. “I think its money well spent. It makes us a safer community and a better prepared community.”

Miller said once the IGA is signed by the county Williams residents will be given more information on how to sign up for the program. They will get notices in their utility bills and the information will be posted on the city of Williams website.