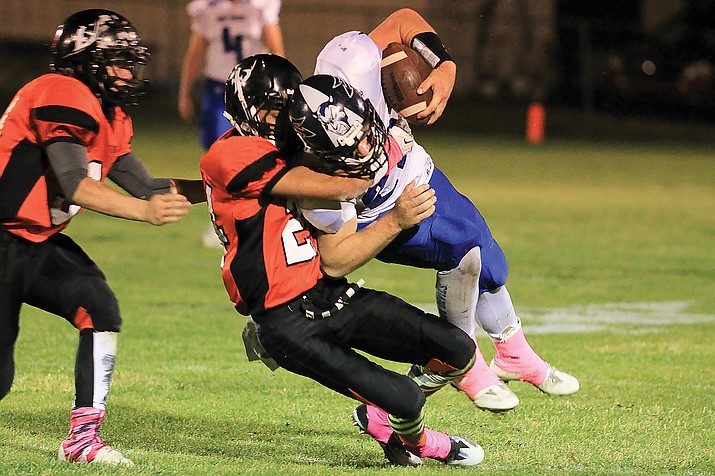 Daniel Lopez takes down a ball carrier during the 1A State quarterfinal game with Valley Union Oct. 29.

WILLIAMS, Ariz. — A tough Vikings offensive and defensive line kept the Valley Union Blue Devils at a near standstill in the 1A State quarterfinal game Oct. 29 at Williams High School.

The Vikings took control of the game in the first quarter and never looked back in the 72-28 rout that advanced them to the 1A State semifinal game.

Viking Zack Perkins goes after a Blue Devils running back.

Valley Union was in the state final game last year and lost to Pima and Brownlee knew the team had a winning tradition.

“They’ve had some success,” Brownlee said. “We knew it would be a tough football game.”

Brownlee said Valley Union has some large players and can move on the offensive line well.

“We knew they were going to be a physical football team,” he said. “However going into the game we felt like we were a more physical team.”

Brownlee said the Vikings matched well with the Valley Union’s strengths but the Vikings coaching staff took advantage of the Viking’s speed.

“We pretty much scored on every possession,” Brownlee said. “It’s hard to slow down our offense. That team likes to play power football offensively and defensively a bit and we were able to exploit their weaknesses and do enough on offense to put up enough points to outscore them.”

Brownlee attributes the win to strong performances by Soria and Tyler Smith, the special teams and the tough defensive line that held Valley Union from moving down field. 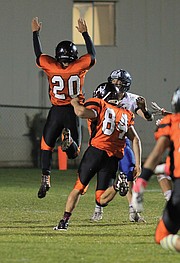 “We knew it wouldn’t just take one tackler but it would take multiple tacklers,” he said. “We had flow to the ball.”

Brownlee said the outstanding play by the Vikings will help when they face Superior in the semifinals of the 1A State tournament next weekend. He said many people believe Superior is the team to beat, but Brownlee feels the Vikings mirror Panthers offensively and defensively. 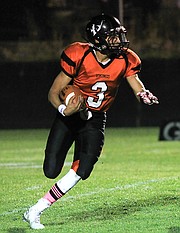 Martin Soria heads toward a first down.

“We had a good game with Joe City and roughed them up pretty good but the game was closer than what the score said,” he said. “So I really feel both teams are pretty equal here but I think it will be the team that executes and controls the line of scrimmage the will win the game.”

The Vikings will face Superior at Maricopa High School Nov. 5 at 2 p.m. The winner of that game will go to the State Championship game and play either Bagdad or St. David Nov. 12.