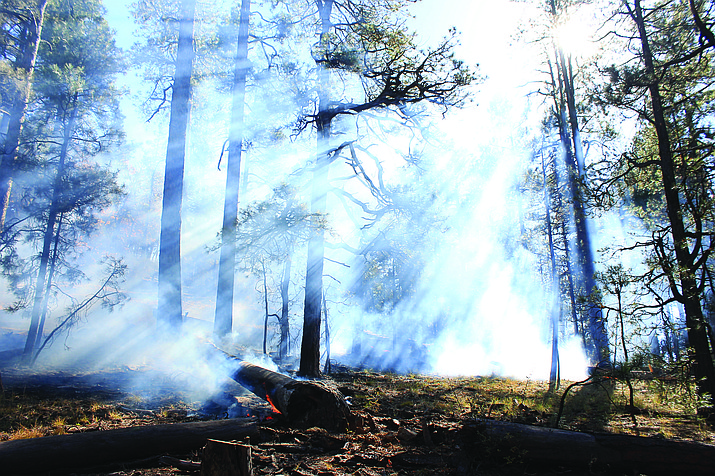 A prescribed burn smolders on the McCracken Task Order near Williams.

WILLIAMS, Ariz. — Heavy machinery and a smoldering fire have done little to deter recreationists from using forest road 108 south of Williams. Campers, hunters and ATV enthusiasts are interspersed with loggers who have just begun clearing a new unit of the USFS Four Forest Restoration Initiative (4FRI).

Tree removal has begun on a 3,571-acre project on the Williams Ranger District of the Kaibab National Forest associated with the Four Forest Restoration Initiative.

The goal of the Four Forest Restoration Initiative is to accelerate the pace and scale of restoration within 2.4 million acres of ponderosa pine forest in northern Arizona to increase resilience and proper functioning. Restoring this fire-adapted ecosystem is accomplished with a suite of restoration activities — from watershed maintenance and habitat improvements to prescribed burning and thinning.

According to Magura, most of what Good Earth Power AZ LLC is removing from the task order areas on the Williams District are smaller diameter trees. As opposed to logging in the past, the Forest Service is trying to leave the robust trees standing to create a diverse and healthy forest.

Prior to the approval of the task order cutting area, Kaibab silviculturists walked through the stands and determined a prescription for each acre. Crews then took the prescription and marked the trees with paint for removal.

A sign is posted on the McCracken unit to make users aware of the thinning operation.

Magura said that one of the focuses of the McCracken Task Order is to open up the meadow and restore it to presettlement conditions. Removing the trees will allow the native grasses to recover and open the watershed. The grasses will carry low-intensity fires and keep the forest litter from accumulating. The spacing of the trees will prevent intense crown fires from burning through the canopy.

“There is an antelope migration route that comes right through here,” Magura said. “They don’t like crossing roads or jumping fences. That’s why it’s important to open that up.”

Magura said silviculturists have several factors they consider when marking trees for removal. He said mistletoe is a problem in many northern Arizona forests and one they are considering on the McCracken.

Logs are stacked awaiting transport by Good Earth for processing.

Mistletoe causes swelling of a branch or stem and can cause cankers, which may serve as infection courts for stem-decay fungi.

The most obvious symptom of dwarf mistletoe infection is a witches’ broom, which forms after a branch has been infected for several years or more. This is a dense mass of profuse, sometimes distorted, branches that form in response to infection by dwarf mistletoe

“It’s a parasite, so it damages the trees,” said Kaibab Harvest Inspector Jason Eakins. “It used to be kept at the lower levels when there weren’t so many trees around. The increased density allows more mistletoe and affects the health of the tree.”

Despite some concerns about the pace of the 4FRI projects, the forest service is satisfied with the work that is being done on the Kaibab according to Banks.

“We are pleased that this amount of work is being done because obviously the forest is being treated,” said Kaibab Public Information Officer Jackie Banks. “Of course we would love to see the work move along even faster but we are pleased with the momentum that is going to complete the work on the Kaibab and specifically the Williams District.

Magura said breeding bird restrictions and weather have limited the time-frame for work on the McCracken project. He said the large amount of snowfall in February of 2016 made access difficult and was restricted between March 1 and Sept. 30 for Mexican Spotted Owls and Goshawks.

“So we’ve got six or seven months where they can’t even operate in this area and that’s why we are attacking this right now,” Magura said.

Magura hopes to have much of the McCracken project completed by spring of 2017.

“We hope to have all the logs removed, chips removed and some of user created roads removed,” Magura said.

Good Earth holds a contract for thousands of acres of thinning around northern Arizona and often skips from one task order to another because of weather conditions, breeding birds and other issues that arise. 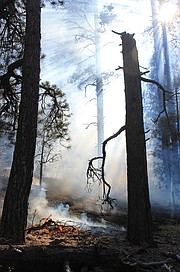 A prescribed burn smolders on the McCracken unit. According to forest managers, low intensity fire reduces the heavy duff and under story in the forest. No additional ignitions are being made on the unit until a DPS investigation is complete from the Oct. 19 I-40 incident.

“Anybody from the Kaibab will of course be advocating to getting as much work done on the Kaibab,” Banks said. “But the big picture is they do get moved around based on needs and conditions throughout the forests.”

As thinning work is implemented, residents and visitors can expect to see heavy equipment and workers in the project area and a long haul routes. Log trucks are expected to begin hauling before the end of the month. The major haul routes will be forest roads 108 and 728 feeding into County Road 73 heading north into Williams on 4th Street and then following Route 66 west to Interstate 40 eastbound.

Members of the public are urged to use extreme caution near timber removal and hauling operations. Besides the presence of heavy equipment and log trucks, there will also be trees being felled and stacked into log decks, which can be unstable. Visitors to the area should not camp near nor climb on them, as they often shift and have the possibility of collapse.

According to Banks, the objectives of the thinning operations in the McCracken Task Order area are to reduce fuel loading and the potential for future high-intensity wildfires, to improve forest health and watershed conditions, and to provide wildfire protection for the City of Williams and its surrounding residences.