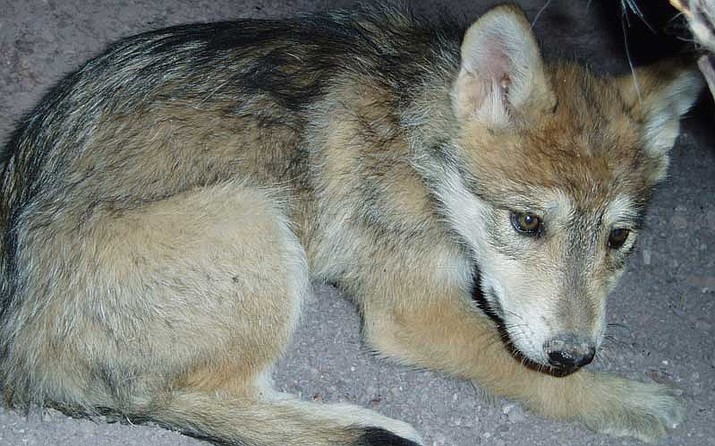 Very young pups are moved from a captive litter to a wild litter of similar age so the receiving pack raises the pups as their own, improving genetic diversity among the endangered species.

PHOENIX — In their native habitat of the southwestern United States, the success of cross-fostered pups among the Mexican wolf population is being documented due to dedicated and collaborative efforts among several agencies and organizations, including the Arizona Game and Fish Department (AZGFD), the Chicago Zoological Society (CZS), the Endangered Wolf Center (EWC) and the U.S. Fish and Wildlife Service (USFWS). The organizations are working together to reintroduce the species to its native habitat in the American Southwest and Mexico.

In April 2016, five Mexican wolf pups were born at Brookfield Zoo in Illinois. As part of the Mexican Wolf Recovery Program, two of the pups were placed in the den of the Arizona-based Elk Horn Pack of wild wolves with the intention that the pack’s adults would raise the two with its own litter. In this process, known as cross-fostering, very young pups are moved from a captive litter to a wild litter of similar age so that the receiving pack raises the pups as their own. The technique, which has proven successful with wolves and other wildlife, shows promise to improve the genetic diversity of the wild wolf population.

On Sept. 18, the Mexican wolf Interagency Field Team, which includes wildlife biologists from the Arizona Game and Fish Department, USFWS, US Forest Service, White Mountain Apache Tribe, and USDA Wildlife Services, captured a male pup associated with the Elk Horn Pack. Genetic analysis done by the Laboratory for Ecological, Evolutionary, and Conservation Genetics at the University of Idaho recently confirmed that the captured pup originated at the Brookfield Zoo. During the capture and handling, biologists gave the wolf a brief exam, administered vaccines and fitted him with a radio collar, which will allow the Interagency Field Team to track him and learn important information about the animal’s survival, dispersal, and potential new pack formation in the future.

“We are thrilled to hear that cross-fostered pups have been located and are doing well with their foster packs,” said Bill Zeigler, senior vice president of animal programs for CZS. “The success of the program is a true testament to the collaboration with our partners.”

“A big advantage of cross-fostering is that we’re introducing wolf pups that have had minimal contact with humans offering a chance to improve genetic diversity while maintaining social tolerance for Mexican wolf recovery,” said Jim deVos, assistant director for Wildlife Management for Arizona Game and Fish.

“The support and partnership the U.S. Fish and Wildlife Service has with the Brookfield Zoo and the Endangered Wolf Center is tremendous. It plays a critical role in the success of Mexican wolf recovery,” said Benjamin Tuggle, the Service’s (Service) Southwest Regional Director. “Long term survival of these pups increases the chances of improving the genetic health in the wild population.  Monitoring their movements and behavior also increases our capability to plan for future Mexican gray wolf conservation.”

An additional cross-fostering event occurred in 2016, the success of which is not yet known.  In April, two pups born at the Endangered Wolf Center were fostered into the den of the New Mexico based Sheepherder’s Baseball Park Pack.  The Interagency Field Team continues efforts to document pup survival in this pack.

The Mexican Wolf Recovery Program began releasing Mexican wolves back into the wild in 1998 — this marks the first time that pups born in the captive breeding program have been successfully cross-fostered into the wild.  In 2015, the Interagency Field Team fostered two pups from one wild litter to another, and has recently confirmed one of those pups is alive in the wild.  This pup, M1347, has dispersed from its natal area and has been documented traveling with an uncollared wolf, presumably a female.

The Mexican Gray Wolf Recovery Program is a multi-agency collaboration between the U.S. Fish & Wildlife Service, the Association of Zoos and Aquariums, the Arizona Game and Fish Department, the White Mountain Apache Tribe, the USDA Forest Service, and the USDA Animal and Plant Health Inspection Service —Wildlife Services, several counties, as well as private organizations. Mexican wolves are the most rare and most genetically distinct subspecies of North American gray wolves. The current population of the species in the captive breeding program is 243 individuals in 54 institutions. As of December 2015, a minimum of 97 Mexican gray wolves were living in the wild. This reintroduced population is now a naturally functioning wolf population.