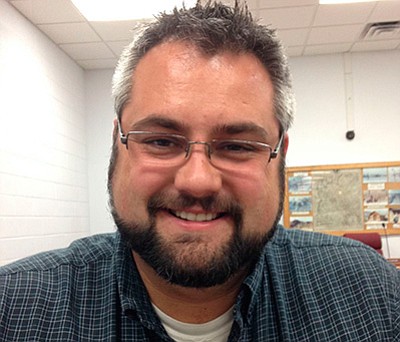 Skylor Miller is originally from Ohio. He and his family have lived in Quartzsite, Arizona for two years and have two children. (Courtesy photo/Quartzsite Times)

The city received 25 applications for the position and staff members spent time reading through the applications before narrowing the field to five applicants.

"We had a lot of good applicants," said Councilman Bernie Hiemenz. "It was tough to narrow it down."

According to Hiemenz, Miller is the current city manager of Quartzsite, Arizona. Originally from Ohio, he and his family have lived in Quartzsite for two years and have two children.

"Skylor had an edge because he's been in Arizona for two and half years and knows the state laws," Hiemenz said. "He and his wife are very active in the community (Quartzsite) and I think they're going to be a good fit here."

The city manager supervises the administration, business and employment affairs of the city and coordinates operations of the various departments. The manager also represents the city in community and regional matters. The position pays between $90,000-$110,000 per year and includes benefits.

The city of Williams uses a Council-Manager form of government. The city is governed by a directly elected mayor and six city council members. The council sets policy and directly appoints several staff positions such as the city manager, police chief, finance director and city clerk.

The city employs approximately 65 full-time employees and 15 seasonal employees. The total annual city budget is approximately $21,000,000 with about $7,000,000 of that amount in the General Fund.

The council reviewed the applications between March 28 and April 1. On April 1 they met to narrow down semifinalists and arrange Skype interviews.

In April the council met in executive session to select the five finalists to bring in for in-person interviews and conduct background and reference checks.

Spotlight on the fire department

Pearson said the department has responded to 30 calls so far this year. He said most of the calls were during the day with an average response time of 13 minutes. He said the department is facing changes with higher hazard construction, three-story hotels, lumber mills, a new truck stop and aging equipment.

The department plans to work with local employers to assist in allowing volunteers to leave work to assist with calls. Pearson said the department covers calls half-way to Ash Fork and half-way to Parks. He said their response time to calls has increased from six minutes to thirteen minutes.

Williams Mayor John Moore said volunteers with the Williams Flag project have approximately 120 American flags and poles available to distribute for free. They have 10 specific days when they would like residents to fly their flags.

The new striping of parking spaces along E. Route 66 was completed May 12.

The council planned to discuss the topic at the May 26 council meeting, but the discussion was tabled for two weeks because of a conflict of interest with the city's attorney.

The council also voted to contribute $1,500, as it has done in years past, to the Parents Who Care group for their Grad Night celebration party. The motion passed unanimously.

Williams resident Kerry Lynn Moede was appointed to the Parks and Recreation Commission.

Council approved a resolution to accept a loan agreement with the Water Infrastructure Finance Authority of Arizona to fund the next phase of the Sweetwater Well project.