Vikings get a jump on summer football program 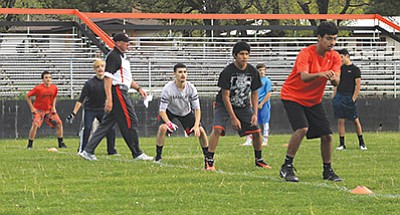 Vikings football players work through drills during the football camp May 18. Wendy Howell/WGCN

WILLIAMS, Ariz. - Vikings football players got their feet wet May 16-20 with a spring football camp at Williams High School.

Players spent the week working on drills, running offensive plays and working on their passing game.

"We try to get in a week near the end of the school year," said head coach Jeff Brownlee. "Per AIA (Arizona Interscholastic Association) rules we can have three weeks, but being a small school we try not to interfere with baseball."

Brownlee said he likes to run the spring camp to get the boys back into thinking about football.

"We try to make this fun," he said. "We want this to be a fun week for them. They've been playing basketball or baseball or just been lifting weights, so it's kind of a refresher."

"The offensive day can be slow and kind of tedious," Brownlee said. "The older kids understand but the younger kids, they'll struggle. We have to put them in a starting position so we can run our play a little bit but it can be overwhelming to them."

The final day of the camp was spent working on the team's solo passing game. The Vikings will participate in a passing league in June.

"We'll travel to Camp Verde and be playing 11-man schools so we have to adjust," Brownlee said. "We kind of break away from what we do traditionally with 8-man football. But it's good. It gets more kids involved in the defensive and offensive scheme."

Brownlee said there will be four passing league dates in June and then he has another camp set up for the middle of July. The team's official practices start around Aug. 1.

Brownlee said there is a strong group of eighth graders moving up to the high school next year. He said he would like to have 30-35 kids show up for the team. He had 27 at the spring camp.

Tanner Grantham, Tiger Grantham and Dave Ernst will be assisting Brownlee with coaching this year. Lucas Zabala will also be offering training with running, agility and weights. The weight room will be open all summer.

"All the kids won't be able to make the speed program or lift weights, but as long as they are doing something it's a plus for us," Brownlee said. "We've made lots of gains this year in the weights class and we would just hate the kids to stop."

Brownlee said most of the players are multi-sport athletes.

"I like to keep these kids busy," Brownlee said. "It gets tough because baseball wants them, basketball wants them. We demand a lot out of our athletes."