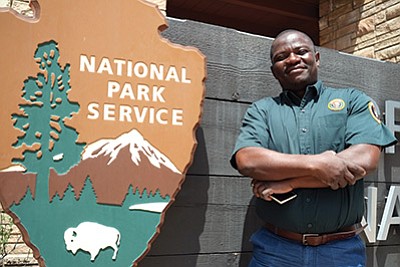 While that may not surprise those living or visiting the Valley of the Sun, it took Joseph Mayombo from Gabon, Africa by surprise.

"It's hotter, particularly in August," he said.

For the last nine months, Mayombo has been a student at the Walter Cronkite School of Journalism at Arizona State University. He came to the U.S. as a Hubert H. Humphrey fellow, which provides a year of professional enrichment in the U.S. for mid-career professionals from countries undergoing development or political transitions.

Having spent the last 20 years as a communication officer for non-governmental organizations the World Wildlife Fund and Gabon National Park, Mayombo requested to shadow staff at Grand Canyon National Park (GCNP) to get a closer look at one of the oldest National Park Systems in the world.

"I believe, it's the oldest and most effective national park system in the world and learning from them is a very important," he said.

"I am blessed for having come here and I have learned many things," he said. "I want to be the most extensive as possible, to make sure that everything is taken into consideration - actions, engagement and the expected results."

As a communication officer, Mayombo has travelled extensively throughout central Africa, specifically in the Congo Basin, to raise awareness and speak on a number of environmental issues. He has helped with protection and conservation efforts of Forest Elephants from poachers, the Pangolin, the Okapi (one of the last remaining ancestors of the Giraffe), lowland gorillas and other great ape species. He also worked to promote appropriate forest management in the Congo Basin.

Upon his return to Gabon, Mayombo hopes to use the knowledge from his time with NPS personnel and the education he received at ASU to raise a greater awareness of these and other environmental issues.

"Maybe (I'll) be doing a little bit of reporting and at the same time doing some environmental education or interpretation. Have a segment where I could gather children and work with them in national parks. Also getting in touch with farmers and discussing with them what could be good for them in order to improve their livelihoods."

From a communication officer's perspective, Mayombo said the exposure and education he received from ASU will help him have relevant interactions with journalists in Gabon.

"I'm going back with an idea of what journalism is," he said. "Solution journalism is how you show a problem through research and give some solutions. I've never seen journalists who come saying, 'this is what is happening and its very bad and this is how things should happen.'"

Mayombo also hopes to dissolve some of the world's preconceived ideas surrounding Africa and to highlight some of his country's beauty.

Gabon, located on the Atlantic Ocean, neighbors the Democratic Republic of Congo and Cameroon. It boasts some of the most beautiful national parks on the continent, however, Gabon's National Parks are relatively young in comparison to the U.S. Gabon created its parks in 2002. Mayombo said he wants to learn from the NPS in the U.S. and said he hopes to re-forge relationships between national parks across the world.

"NPS is one of the strongest experts in park management in the world and spending time with them will be good for the NPS back home," he said. "And if not for the whole of Africa, but for the Congo Basin, or at least for Gabon, rekindling that connection and bringing back the collaboration between NPS and Gabon's NPS will mean a lot."

Mayombo's passion for conservation began after he was approached by an non-governmental organization who was raising awareness for the Pangolin, a small mammal found in sub-Saharan Africa that is endangered by illegal trading and hunting.

Friends of the Pangolin was one of the first mammals Mayombo worked to help protect.

Friends of the Pangolin spread the word about the Pangolin's plight through media and its own newspaper. Mayombo assisted with environmental education activities and contributions to the NGO's newspaper.

Three years later Mayombo was commissioned as the communication officer for the World Wildlife Fund (WWF). A position he held for the next 14 years.

It was during this time Mayombo was able to delve deeper into many other environmental issues in the Congo Basin, including the plight of forest elephant, pangolin, gorillas and other great ape species and the okapi and was able to work to ensure logging companies were certified in order to help with forest management.

"I interacted with people - specialist, educators to promote conservation of wildlife protection," Mayombo said. "(Because) you can do logging or work timber but at the same time you need to be cautious, careful of the other living things in the forest. That's why we promoted sustainable forest management through certification."

The Congo Basin has the second largest contiguous tropical forest after the Amazon rainforest in South American. According to rainforest-rescue.org, there are five major tropical rain forest regions in the world: Central America, the Amazon Basin, Africa, southern Asia and Australia. Ninety percent of tropical rain forests in the world are concentrated in 15 countries with six in African countries.

Many of the animals Mayombo worked to protect were threatened from either poaching or through loss of habitat because of logging activities.

According to Mayombo, ensuring logging companies received appropriate certification through the Forest Stewardship Council, helped create accountability and specific requirements for loggers. According to Mayombo, the Forest Stewardship Council helped ensure proper treatment not only for the forest but also for employees of the logging companies, who often are not treated or housed fairly.

While working for WWF, Mayombo helped create the first network of environmental journalist in Central Africa. However, after creating the group he stepped back to give them their own voice, but because of inadequate funding the group became dormant. Mayombo hopes to change that when he returns to Gabon.

"I created the crew of WWF journalists to encourage them to be interested in environmental news, issues and report on environmental issues," he said. "That's one of my objectives when I go back, to revamp it and bring back some new dynamics to it."

In 2012, Mayombo was recruited by Gabon National Park Service (GNPS) as the deputy communication director, position that was similar to the one he held with WWF and included interacting with media and conducting interpretative environmental education for the public.

Mayombo said he plans to apply what he learned from his fellowship at ASU and at the park by building positive relationships and encouraging active and accurate reporting.

"I like being positive in presenting things," he said. "I want to be positive in my writings and to be different. We already have a bunch of people writing about negative things and criticizing. I will be summarizing what happens.