Track and Field sends 11 competitors to state, ends season on a high note 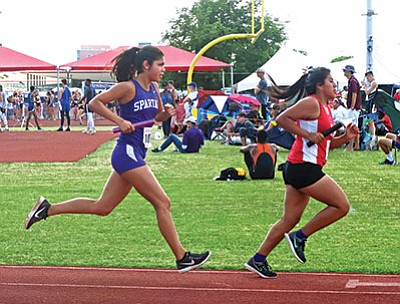 GRAND CANYON, Ariz. - The Grand Canyon Track and Field team rounded out the season by setting new school records and having 11 out of 24 students qualifying for the state track meet May 6 - 7 at Mesa Community College.

Head track coach Elna Perkins said this year's team was primarily underclassmen who have a lot of potential in upcoming seasons. Perkins said while there was a learning curve at the start of the season she noticed that as the team progresses, their real strength came from one another and their ability to encourage and challenge each other.

"They really seemed to enjoy the relays," she said. "Even the boys who were not placing and getting state qualifying times enjoyed the effort of winning together or losing together. It was a really neat season."

In the end Grand Canyon had state competitors in shot put and discus, high jump, girls 4 x 400 relay and girls 4 x 800 relay. The team did not have any male relay teams or individual runners make it to state.

Perkins said the team worked hard to qualify for state, especially after several students suffered injuries at the end of the season.

"They dropped (the time) by 11 seconds over the season," Perkins said. "One thing they did, mostly at the end of the season, was practice their handoffs."

Perkins said the team also increased its speed through strength and conditioning.

"It was mostly conditioning throughout the season - strengthening their legs and their lungs," she said. "Then it was just grit, powering through and doing the best they could."

Perkins said at every meet each relay member aimed for best individual times and said the girls also really enjoyed running together.

Perkins said she had Montonyo, Dimas and Perkins run in the same order for the 4 x 800 as the 4 x 400 since they were comfortable in those positions and in the handoffs.

Prior to the state meet, the 4 x 800 relay had only run the relay two times.

"The 4 x 800 is a very difficult race, so those girls were more comfortable with the 4 x 400," she said. "The 4 x 800 is longer than a sprint but it's not a distance race like the mile or two mile. So you have to have a very unique athlete who can run the 800 with a good time. They have to have endurance but be able to sprint at the end when they're finishing the last 100 meters of the race."

Grand Canyon School had two athletes, both sophomores, qualify and compete in field events. Neegoh Kaska, the only boy to compete at state, competed with a 12 pound shot put, throwing 38 feet, six inches and 99 feet, nine inches for discus. His season best for shot put was 38 feet, eight and a half inches and for discus 117 feet, nine inches.

Melisha Nanacasia competed at state with an 8.8 pound shot put, throwing 28 foot, 10 inches. Her season best was a 29 feet, one inches. This was Nanacasia's second year attending state but first year competing.

Perkins said that while Kaska was the only boy to qualify for state, the team does have some very promising male runners on the team and she expects that some of the boys will attain the state level of competition next year.

"Now that they have experienced one season and have seen the state meet, I believe that they will set new goals for themselves next year," she said. "It's good that they have had this experience so next year when they qualify and make it they can have some of the jitters out and be able to really perform their best."

"Bently Monk has been working on putting together a throwing clinic for students this summer," Perkins said. "People are really impressed that we've had kids make it to state without having a throwing coach here. We just do the best we can, but we don't have anybody who is a throwing specialist."

Richardson qualified for state but because of shin splints was not able to compete. Richardson's season best was a four feet two inch jump.

Because Perkins' had a young team to work with, she is hoping for a solid team next year.

"I think a lot of the kids will come back," she said. "We've got a young team and I'm just really excited for the possibilities in future years and I hope that they'll be able to complete and place at state. What's really impressive is that most of the kids who qualified are underclassmen.

This was Perkins first year coaching. She said it was a positive experience and said she hopes to return next year.

"I love this team," she said. "It may be a different approach to coaching, but they know that I care and I am not a "win at all costs" kind of coach. I want them to do their best and get personal records every time they compete, but I also do not want them to get hurt as they are competing or be down on themselves if they have a bad day. I explained my expectations to the team at the start of the season and they lived up to it. I told them that I wanted the host schools to be glad that Grand Canyon Track and Field is competing at the meets. I expect them to be supportive of each other, focus on their academics first and use clean language and good behavior. They met those expectations."