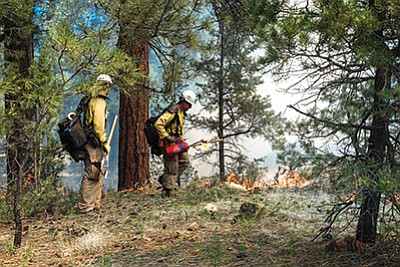 Rocky Mountain hotshots and Grand Canyon fire crews work on a prescribed burn at the Grand Canyon May 19. Loretta Yerian/WGCN

TUSAYAN, Ariz. - Camping, roasting marshmallows and long evenings by the firepit are all sure signs summer is on its way. With moderate fire restrictions in place, this fun in the forest is a thumbs up in the Williams and Grand Canyon area.

Low fire restrictions are uncommon in Arizona in the summer and wetter conditions on the Kaibab are a welcome change from high fire levels in past years.

"It's rare for us to get through the last few years without having to raise these restrictions," said Bob Blasi, fire prevention officer for the Tusayan and Williams Ranger District. "Right now it looks like there will be no changes or at least no restrictions in place in Tusayan or for the entire Kaibab (National Forest)."

Blasi said weekly talks between fire districts, tribes, county, state and city officials across the state, could change that.

"Discussions are happening weekly between multiple forces, that includes Prescott, Coconino and Kaibab (forests)," he said. "They're all looking at several influ-encing conditions with the weather being the number one condition."

As the fire districts consider fuel conditions of the forest and how much moisture is being held in the ground, they are able to determine how safe the forest is from both man-made and natural fire causing elements. Blasi said

The late moisture could cause a bumper crop of grasses that could increase fire levels.

"There's a lot of green out there," Blasi said. "That big push of moisture that happened recently gave an available amount of moisture in the fuels, but it still hasn't been able to lower the fuel moisture yet."

One big contributor to low fire levels in recent years has been because of management activities by the Forest Service and prescribed burns in the forest.

Additionally, of the 21,111 acres burned in wildfires in 2015, 98 percent were from wildfires managed for multiple objectives with only two percent (440.2 acres) being from suppression fires.

According to the Forest Service, the average cost per acre of a wildfire managed for multiple objectives in 2015, was 10 times less than that of a wildfire with a suppression strategy.

However, even with fire danger at a moderate level. Blasi said the public and those using the forest need to be diligent in helping keep the forest safe.

"We are constantly trying to remind people that it's their responsibility. It is never okay to leave an abandoned campfire, even when it's raining," Blasi said.

If the fire level is raised and an individual is caught having a campfire it could mean a mandatory appearance before a federal magistrate.

Because of the volume of visitors to the Kaibab, many visitors camp in the national forest. Blasi said when camping in the forest, there are several things that can be done to ensure your campfire is completely out.

"It's a good practice, always, when you're going to be camping, to carry a shovel and some water," he said. "Stir it up real good and put your hand in it to make sure it's cold to the touch."

"Fireworks are never allowed on U.S. Forest Service lands, they are completely prohibited in the national forest," Blasi said

"With the monsoonal trends - they're expecting rains to come in right on time, around the first week of July, we might actually get lucky and get through this whole season without going through fire restrictions - we are going to remain optimistic," he said.

To get the most current fire restriction updates, visit firerestrictions.us/AZ/.