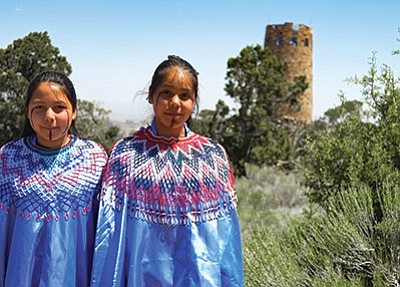 Monae Chavez of the Havasupai Tribes performed a traditional dance during the rededication of the Watchtower May 22. Loretta Yerian/WGCN

GRAND CANYON, Ariz. - In the last year the Desert View Watchtower on the South Rim of Grand Canyon National Park (GCNP) has been transformed from a gift shop into a place to celebrate, share, and learn about the heritage of Grand Canyon's 11 traditionally associated tribes.

On May 22, a ceremony was held by GCNP at the Watchtower to commemorate the grand re-opening and rededication of the Watchtower from a souvenir shop to a cultural heritage place. Representatives from the National Park Service (NPS), Grand Canyon Association, Grand Canyon's InterTribal Advisory Council (ItAC), the American Indian Native Alaskan Tourism Association (AIANTA) and the Bureau of Indian Affairs attended the event.

"Thanks to the hard work of the ItAC and our partners, this project re-envisions how visitors experience Desert View and the entire park. This will lead the NPS into the next century," said Dave Uberuaga, superintendent of GCNP.

The Watchtower is located at Desert View, the eastern-most developed area on the South Rim of the park.

The 70-foot tower has several observation decks and is one of the most prominent architectural features on the South Rim of the Canyon.

In January 2015, the Watchtower was designated a National Park building after it was purchased from Xanterra - a park concessionaire operating lodges and restaurants at the park. After the park took over ownership of the tower they were able to move forward in restoring it to some of its original qualities. Recognized as a National Historic Landmark, the tower was constructed in 1932. Architect Mary Elizabeth Jane Colter's design takes its influences from the architecture of the ancestral Puebloan people of the Colorado Plateau. She collaborated on the design with Hope artisans of the day, including well-known Hopi artist Fred Kabotie whose murals adorn much of the second level of the tower. Ed Kabotie a renowned musician, artist and silversmith, carries on his grandfather's legacy.

In 2014, the park began to use the Watchtower as a place where Native American could display and demonstrate various artforms. The cultural demonstrations take place regularly during the spring and summer and include jewelers, silversmiths, weavers, potters and musicians. Demonstrations are intended to help park visitors learn more about the history and diverse cultures of the region.

"The Watchtower itself has a lot of personal significance for me, mainly because of my grandfather," Kabotie said. "My heaviest mentors when I was growing up was my grandfathers, my family was going through rough times and was really the grandparents that held down the fort. He was a very special person."

Kabotie said his grandfather's influence in his life helped give him direction as an individual and artist.

"I knew he did these things (painting the Watchtower's murals), but he was just my grandfather too," he said. "When we would come to places like this and see things like this and have them explained to us and at the dinner table he would tell little stories about his adventures, it was something else. So when I come here I feel like I'm visiting him. It's heavy for me and especially to see the paintings themselves."

The Desert View area has been used as a gathering place for thousands of years. Visitors can see a glimpse of the ancient past at the Tusayan Ruin and Museum. Today Desert View represents the physical and cultural gateway from Grand Canyon National Park to the Navajo and Hopi reservations.

The revival of Desert View as a cultural heritage site provides opportunities for the public to continue to connect and learn about the park's associated tribes.