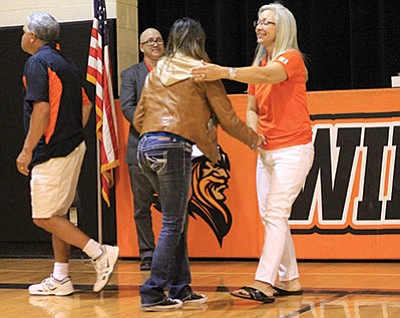 Several community groups and individuals presented various scholarships and high school counselor Jim Powers presented the six students with the Lumberjack scholarship. The NAU Lumberjack scholarship is awarded to students who have a cumulative grade point average of 3.5 and have received no grade lower than a B in the core classes of science, math, English, social students and foreign language for their entire high school career.

"It is a wonderful scholarship," Powers said. "NAU covers tuition for 4 years at the university. That's worth a lot. That comes out $9,746 per year for 4 years."

Ross was also awarded a $21,000 scholarship to Embry-Riddle Aeronautical University in Prescott for each of the four years she attends. This includes an AZ Basis and Women of Excellence scholarship. Ross is also on the waitlist at the Air Force Academy.

Scholarship to Brook O'Leary and Joe Howe. They each received $200.

"This scholarship was presented to students for the academic achievement as well as personal involvement in both the school and community," Powers said.

The Bill Williams Mountain Men awarded three students with $1,000 scholarships. The award was based on a student's potential for academic success, participation in extracurricular activities and the need for assistance. Ross, Karlsberger and Ellico were offered the scholarship.

"We are proud of your accomplishments to your school and community. We award this scholarship in hopes to help you pursue your dreams," Powers read in a prepared statement from the Bill Williams Mountain Men.

"We are pleased to present this award to these five students who have demonstrated a dedication to serving our community," Shirley said.

Danny Harness presented the Thomas and Florence Clough Memorial and The Bruce Megginson Memorial scholarships on behalf of the Masonic Lodge of Williams. Karlsberger and Howe were awarded the scholarships.

The Williams Education Association awarded a scholarships to Karlsberger. Natalia Mann presented the $250 scholarships for the organization.

"Williams Education Association is a professional group of teachers and classified staff. We believe in supporting our students in their personal endeavors. I was happy to see the excellent essays written this year and we are proud to present this scholarships," Mann said.

Powers presented the Williams High School Student Council scholarship. This $250 scholarship was given to Ellico and Karlsberger for their academic achievement and personal involvement in both school and community.

"Kiwanis asks each of you to follow your dreams, this skies the limit," O'Campo said. "Your hard work is honored tonight."

The Kaibab Employees scholarship awarded Ellico with a $500 scholarship.

"We are honored to present this scholarship for your academic achievement, your personal involvement in your school and community, and your respect for public lands and its management," the organization said in a prepared statement.

"We are always pleased to award these to our students because we know every little bit helps," Helgeson said.

For the first time, the Williams Hospital District Board offered scholarships to Williams High School graduates. Linda Russell and Mary Case sought a high school senior interested in gaining an education in the medical field and awarded Hernandez and O'Leary with $2,500 scholarships.

Tiger and Julie Grantham presented the Chance Grantham Memorial Scholarship for $1,100 to Hernandez.

"Our son passed away about a year ago. He was a 2006 graduate of Williams High School and was a scholar/athlete. We want to do this to memorialize him and to help a student out," Tiger Grantham said. "Be proud of your kids and tell them that. You need to tell them and they need to know."

"Her family offered a scholarship for many years here in Williams and we thought what a great way to honor our beloved friend," Nicoson said. "She had a long life and she touched many people with her attitude, kindness, generosity and her love of her family friends and bowling.

Autumn Lann was awarded a Certificate of Congressional Special Recognition presented by Powers.

"By seizing opportunities and working hard you've distinguished yourself through extracurriculars, community involvement and overall an desire to make your school and community a better place," Powers read from a statement by Rep. Ann Kirkpatrick. "Members of your school faculty have selected you to receive this congressional recognition for your outstanding service and for being an example to your peers."

Boyack and Ellico received recognition for their selections as the Arizona Boys and Girls State recipients. Perico Avila represented the American Legion and awarded the students with the honors.

Powers said that many students have applied for other scholarships that haven't been selected yet.

"We don't get then all here tonight," he said. "They come here all year long. More will come in soon after this."