Blast from the past: Theodore Roosevelt impersonator brings history to life at Grand Canyon 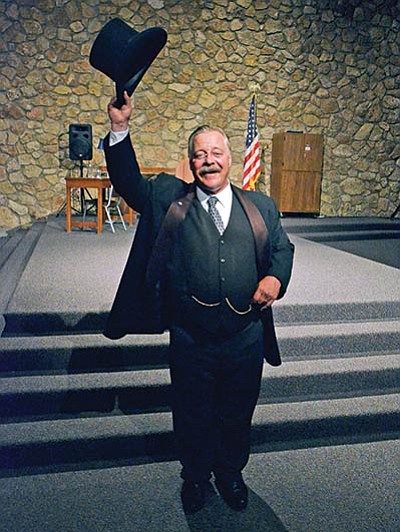 GRAND CANYON, Ariz. - It's not everyday you see a U.S. president out for a walk along the South Rim of Grand Canyon National Park.

On May 6 and 7 visitors to the Grand Canyon watched in curiosity and fascination as impersonators Joe Wiegand and Ron Brown greeted the Grand Canyon Train and walked the rim trails at the Canyon.

Wiegand began performing as U.S. President Theodore Roosevelt in 2004 and has been featured as Roosevelt in television productions and special performances across the U.S.

"It's a joy and a pleasure to be known as America's top Teddy Roosevelt impersonator," Wiegand said. "Thank goodness I don't look like Calvin Coolidge, I'd be doing very short programs in Vermont. Doing Theodore Roosevelt is a pleasure and an honor and to do so here at the Grand Canyon, a place that he made a national monument a decade before it became a national park, is a wonderful experience."

Wiegand's roles as Roosevelt have included 'The Men Who Built America' on the History Channel, a feature role in "America Wild," a film about national parks that was released in IMAX theaters in January and served as the model for the newest Roosevelt sculpture at the American Museum of Natural History in New York City.

During his visit to the Canyon, Wiegand gave two special evening performance May 6 and 7 at the Shrine of the Ages. He also greeted passengers at the historic train depot in Grand Canyon Village and gave a special appearance at Verkamp's Visitor Center for a history talk, where he was joined by Ron Brown impersonating John Hance, a long-time resident of the Grand Canyon, who helped open the first tourist trail into the canyon during the late 19th century.

"It's a privilege to bring Captain Hance and Theodore Roosevelt together at the same time," Wiegand said. "It's a privilege to work with a craftsman like Ranger Ron Brown, he's at the pinnacle of first person historic interpretation and he knows his stuff and he's a great character. He brings to life a sort of down to earth character that Theodore Roosevelt would have found good companionship with."

Wiegand said there was great synergy between his and Brown's characters and said he admired Brown's impersonation of Hance.

As Roosevelt, Wiegand has been hailed as the bestpresidential impersonator in the country. Wiegand adapts his performance for each unique audience, whether it is public meetings, luncheons or banquets.

This was Wiegand second professional visit to the Canyon. In 2013 Wiegand visited the Canyon to help re-create a photograph taken at the historic Kolb Brother's studio featuring Roosevelt leading a procession of mules down a Canyon trail. Wiegand's visit this time was specially timed with the National Park's centennial celebrations.

"The world comes to see the Grand Canyon, Theodore Roosevelt told American's that we should preserve it as the one great sight which every American should see," Wiegand said. "Now that we know that it really is a great sight that every citizen should see and we are so glad that people from around the world, come to see this beautiful work that's been preserved by people like Roosevelt and the American people."

Theodore Roosevelt was the 26th president of the U.S. He became president following the assassination of President William McKinley. Roosevelt was the youngest president in U.S. history. He brought new excitement and power to the office, vigorously leading Congress and the American public toward progressive reforms and a strong foreign policy. Roosevelt was a soldier, statesman, explorer, historian and author.

According to whitehouse.gov, Roosevelt took the view that the president, as a steward of the people, should take whatever action necessary for the public good unless expressly forbidden by law or the Constitution.

"I did not usurp power," Roosevelt wrote, "But I did greatly broaden the use of executive power."

Roosevelt became a war hero during the Spanish-American War when he led a charge with his Rough Rider Regiment at the battle of San Juan. He won the Nobel Peace Prize for mediating the Russo-Japanese War, reached a Gentleman's Agreement on immigration with Japan, and sent the Great White Fleet on a goodwill tour of the world. It is reported some of Roosevelt's most effective achievements as president were in conservation. He added enormously to the national forests in the West, reserved lands for public use and fostered great irrigation projects. He left the presidency in 1909 and went on an African safari. In 1912 he ran for president on a Progressive ticket, Roosevelt lost the election to Woodrow Wilson. While campaigning in Milwaukee, he was shot in the chest. Roosevelt recovered, but his words at that time would have been applicable at the time of his death in 1919: "No man has had a happier life than I have led; a happier life in every way."