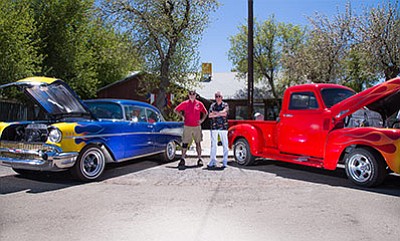 WILLIAMS, Ariz. - Owners of classic cars, hot rods and one-of-a-kind street machines are gearing up for the first annual Historical Route 66 Car Show May 21 in Williams.

Car buffs throughout the state will be given a chance to celebrate the 90th anniversary of the Mother Road by viewing restored vintage cars and visiting downtown Williams before the summer crowds.

The event is the brainchild of several business owners who have been hoping to bring a car show to the downtown area early in the spring.

"We want to bring business to the downtown area a bit earlier in the season," said event coordinator Josie Bustillos. "We want people to see our shops. We want them to eat there and shop there."

The Historical Route 66 Car Show benefits the America Legion Cordova Post 13 of Williams. The post is hoping the show becomes an annual event that will help fund their community activities. The post supports numerous programs in the community. They place flags along the streets on patriotic occasions, they fund funerals, put on flag retirement events, provide high school scholarships, host Run for the Wall motorcycle riders, and maintain Williams Monument Park.

"We do anything having to with veterans and their benefits," said American Legion member John Holst. "We honor veterans and those who are enlisted and serving today. We are low key but want to be source of connection with the community and the servicemen."

Cordova Post 13 is also raising money to build two new monuments at Monument Park. One will be a memorial to the sailors and Marines who were killed when the USS Arizona sank during the attack on Pearl Harbor Dec. 7, 1941. The memorial will display part of the battleship that was presented to the city of Williams Nov. 11, 2015 at a veteran's tribute banquet. The second monument will be a memorial to Frederick Platten, a resident of Williams who was awarded the Congressional Medal of Honor and had a very colorful history. He is buried in the Williams cemetery.

The Historical Route 66 Car Show already has several downtown sponsors along with Coca-Cola who will have a tent set up for registration the day of the event.

"We hope that after this year other businesses will participate," Bustillos said.

Bustillos said she has responded to more than 100 requests for registration packets and has confirmed 25 entrants for the event.

"That's pretty good for a first year event, and we know many won't register until the day of or night before with their registration packets in hand," Bustillos said. "They watch the weather. We're crossing our fingers and hoping for the best."

Cars will begin lining up at 8 a.m. May 21 in the downtown area. Cars will be judged and winners will be awarded handmade trophies at 2 p.m. in front of the Italian Bistro. The trophies are made out of actual car parts.

"People have been asking for another car show, the town was kind of built around that," Bustillos said. "We just want to add something so people can come visit our beautiful town. The responses show me that people are really excited about this show, they really love this town."

More information for the event can be found by visiting the Historical Route 66 Car Show on Facebook or online at http://www.historicalroute66carshow.com.