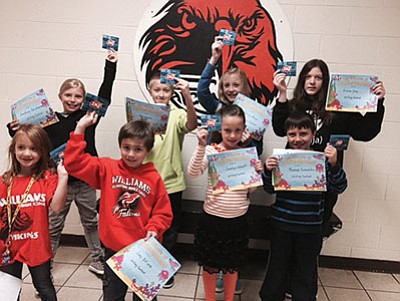 WILLIAMS, Ariz. - Williams Elementary-Middle School students were given an opportunity to compete for gift cards and accolades in a school writing contest March 24.

Several students in kindergarten through eighth grade wrote original and unique stories of 101 words or less. The submissions were judged separately for each grade level with the winners being published in the Williams News. The students also received a Dairy Queen gift card, an award certificate, a writing tips book and acknowledgement from the Williams Unified School District governing board.

The stories were required to have a beginning, middle and end that closes the circle yet leaves the reader wanting more. Students were asked to chisel their words, consider characters, and create a setting, conflict, plot, suspense or twist.

The winners are published below:

Once upon a time there was a beautiful rose. Nobody found it was a rainbow rose. She loved to talk to the other roses and flowers around her. One day a mean witch poisoned the flowers but the beautiful rose used her magic powers and wings to stop the witch then they all lived happily ever after.

Once upon a time there was three little pigs. They all made houses. One with straw, one with bricks, one more with sticks. All of a sudden the Big Bad Wolf went to the stick house and he said "Little pig, little pig, let me in." "No, no, you ain't coming in." "So I will blow your house," he said. And he did and he went to warn the next one. The two ran to the next house. They were safe! And then the Big Bad Wolf was sad and then he left and then they were happily ever after.

Once upon a time there was a little cat named Fluffy and he liked to explore. One day he left home to find the Legendary Cat Treat. He searched the land far and wide. He explored caves and millions of other rare places, but yet he could not find it. One day he found a cave that was 650 feet underground. He was amazed. He saw a glowering piece of delicious cat treat so he looked beyond it. There was the amazing Legendary Cat Treat. There was a lot of traps but he got to it!

Bobby went to school and enjoyed it. He loved he teacher Mrs. Elnor. She was the best. Bobby did what his teacher said to do. He got student of the month for his greatness. "I want to be a teacher," said Bobby. His parents were very happy. Bobby grew up and became a teacher and inspired other kids. He was a teacher for fifteen years.

One day there was a group of friends. There were five friends. The leader was named Vladimir. There was Ricky, Daisy, Katie and John. Daisy is a dog. Vladimir is a vampire. Vladimir's nickname is Mahlyenki Dyavol. It means rule with peace. So one day they saw this guy. He shot at them. They ran. But not Vladimir. He fought the hobo for the gun. And Vladimir saved the day and became famous.

Around the Corner by Marcie Heap (Grade 6)

Sammy was walking home from school on an empty street. She was heading towards a corner. Right when she was about to turn, she heard click, click, click. What was that? Suddenly she heard a really loud shriek. Now she was really wondering if she should go around the corner. What if there was a man with a chainsaw? Or a three-headed dragon? What...Sammy's thoughts were cut-off by another shriek. She braced herself to turn around the corner, a sharp pen in her hand. Sammy turned around the corner...

There once was a girl named Carissa. She shut everyone out. One girl named Elaine wouldn't leave Carissa alone, no matter what. Elaina wanted to know why Carissa shut everyone out. Carissa just wanted to be alone. One day Carissa was walking in the woods to get away from Elaina. Elaina was following her. Then suddenly a troll came out of nowhere and started attacking Carissa. When the troll was about to finish her off, Elaine jumped in front of her and she was killed. Just then Carissa realized how much Elaina meant to her as she cried.

The Day by Samantha Russell (Grade 8)

It was finally time. Four months of hard work leading up to this. The weeknights spent on the field, marching to their places repetitively, changing formation. The hours spent running drills. It all lead to this. One mistake, they were ruined. Anything could go wrong. There was no time left to perfect. The opportunity was here. The team members came to a silent decision: they would accomplish this. They lined up, ready for the task ahead. The music played, guiding their steps, flowing through them. The crowd screamed their approval. They succeeded. They are a marching band.

Have cat, will travel: Cees and Madison Hofman and their cat, Vladimir Kitten, set out to visit all 59 national parks (Photo Gallery)
Skunk problem in Williams?
LiLou the therapy pig visits Grand Canyon
School letter grades: How did Williams do?
September Students of the Month for Williams Elementary-Middle School
Event Calendar