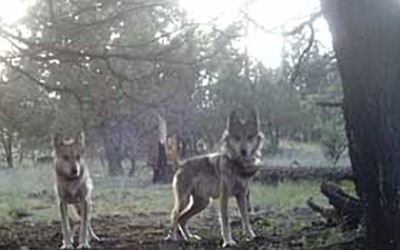 GRAND CANYON, Ariz. - In 1998 Mexican Gray Wolves were reintroduced to the Arizona landscape. From 1998 to 2014 there were over 297 confirmed and/or probable wolf kills on livestock in the Blue Range Wolf Recovery Area (BRWRA) where the endangered wolf population went from 110 to 97 in 2014.

BRWRA is a 4.4 million acre area within the Apache and Gila National Forests in Arizona and New Mexico.

Carey Dobson, a fourth generation rancher operates three cattle ranches, all located in the BRWRA. In the last 16 years, Dobson has reported over 50 wolf depredations, a number he says is closer to 100 since he didn't start reporting losses when the wolves were first released. On an annual basis, Dobson puts out around $60 to $70,000 in out of pocket expenses for wolf related issues.

The Mexican wolf is the rarest subspecies of gray wolf in North America. Once common throughout portions of the Southwestern United States, it was all but eliminated from the wild by the 1970s, according to the US Fish and Wildlife Service (USFWs). Almost all of the Mexican gray wolves were exterminated from the wild in the United States and Mexico by the early 1970s. Passage of the Endangered Species Act in 1973 led to the live capture of the last wild Mexican gray wolves and later resulted in successful captive breeding of seven of the wolves. In 1998, wolves were released back into the wild in the BRWRA within the Mexican Wolf Experimental Population Area.

In 2009, a Mexican Wolf/Live-stock Interdiction Trust Fund was established by U.S. Fish and Wildlife Service, in cooperation with the National Fish and Wildlife Foundation to provide compensation to livestock producers suffering from wolf depredations and compensation for damages through the Coexistence Council. To be eligible to receive compensation from the council, Wildlife Services must determine the loss as confirmed or probable. Payment amounts are established by the council and are based on market value. The reintroduction project is managed by the USFWS in collaboration with Arizona Game and Fish Department (AZGFD), USDA Forest Service, USDA-APHIS Wildlife Services and the White Mountain Apache Tribe.

For Dobson and other ranchers living along or close to the BRWRA any losses on livestock are unacceptable.

"If they want these wolves they need to pay for them, I'm paying for them," Dobson said. "I need to be compensated. Why should I pay for everybody else to have that animal?"

Andy Groseta, a third generation Arizona rancher and past president of Arizona Cattle Growers Association (ACGA) and the National Cattleman's Beef Association said the Arizona Livestock Loss Board was passed by Arizona legislation as a new depredation/compensation board

"I think where a lot of the cattlemen are at is if the public wants to run wolves out there on the landscape, just pay us for them," Groseta said. "We get paid by our calves. The program that they have in place right now for compensation is really a joke. You've got to prove the cow has been killed by a wolf and by the time you do all that stuff it's almost impossible."

The Arizona Livestock Loss Board, created by Senate Bill 1466, was passed through state legislation in 2015. Since the bill passed, board members have met several times to determine what the board will be able to provide and the compensation it will be able to provide. As the board figures out what prototype they will use and how it will operate, ranchers and livestock producers have several options for getting compensated on their losses.

The Agricultural Act of 2014, administered by the U.S. Department of Agriculture Farm Services authorized the Livestock Indemnity Program (LIP) to provide benefits to livestock producers for livestock deaths in excess of normal mortality caused by adverse weather and attacks by animals reintroduced into the wild by the federal government or protected by federal law, including wolves and avian predators.

"They attribute losses to natural causes, which in this case would include any predator reintroduced by the government," said Jon Cooley, endangered species coordinator with the Arizona Game and Fish Department (AZGFD). "In the case of wolves it meets that criteria."

To qualify for LIP, producers must have legally owned the eligible livestock on the day it died. LIP excludes wild, free-roaming animals and pets or animals used for recreational purposes including hunting, roping or show.

The Wolf Livestock Council (also known as the Coexistence Council) is the primary means of compensation for the BRWRA.

The Coexistence Council is overseen by an 11 member volunteer group of livestock producers, tribes, environmental groups and county coalitions. It was created by U.S. Fish and Wildlife Services in 2011 and provides two types of compensation - depredation loss compensation (losses must be confirmed as a wolf kill) and pay for presence. It also records the number of depredation loses inflicted by Mexican gray wolves each year.

Dobson has worked with several boards but uses the Coexistence Council for the majority of his losses. According to Dobson, getting compensated for losses is normally a lengthy process and the pay for presence doesn't begin to cover the real dollar amount of costs for living with wolves. Dobson said the real problem is that compensation boards, including the Coexistence Council don't have enough funding to pay for losses.

"The Coexistence Council is trying but with no funding," he said. "They do what they can... I think most of the money goes to the people who work there instead of going toward the real problem. The real issue, is depredation and trying to do proactive things... (the council) doesn't have the money to do what they need to do. The funding isn't there."

The Coexistence Council is a grant funded organization that put together a Strategic Coexistence Plan with the goal of reducing wolf/livestock conflicts and the need for management removals of depredating or nuisance wolves, according to the council's website. The council plans to achieve its goals through the use of a Coexistence Plan, which has a threefold mission; sustain viable ranching, protect healthy western landscapes and advance a wild, self-sustaining Mexican gray wolf population.

According to the council's website, depredation reports and requests for compensation are forwarded to the National Fish and Wildlife Foundation for payment from the Interdiction Fund and made directly to the livestock producer.

"Probable depredations will be paid at a rate of 50 percent of confirmed depredations. Injured animals may also be compensated at the discretion of the Coexistence Council. If livestock other than cattle or sheep are depredated by wolves, compensation will be based on the class of livestock depredated," the council stated in its 2014 strategic plan.

To prove depredation by wolves, ranchers cover the animal with a tarp until USDA-APHIS Wildlife Services arrive. APHIS conducts an investigation, which involves checking and measuring bite marks in centimeters to ensure it was a wolf bite. A report is then issued to the council and compensation is made based on the market value of the animal.

"That's the good part, we do get compensated. It just takes a long time to get our money," Dobson said. "When we do get our money we are compensated just for the depredation, there's nothing for all the other impacts that the wolves have on us."

The council also pays out money in the 'pay for presence' compensation. Pay for presence takes into account the number of cattle and land shared in wolf territory. Based on the wolf to cattle to land formula, payment is made to ranchers to help offset costs incurred on the land.

"It's an effort to provide ranchers money to offset the increased management that they incur in having to manage their livestock on a shared landscape with wolves," Cooley said.

However, Dobson said the pay for presence doesn't even begin to offset costs incurred by ranchers who have to move their herds to different pastures to avoid wolf packs. Some costs include fixing fences, hauling feed and water and additional labor costs.

Dobson said once the Arizona Livestock Loss Board is operational he plans to work with them too.

"We have these boards but there's just no money to do anything," he said. "It's good talking places but nothing happens. They just don't have the money. I'm a cattle rancher, I'm not lobbying for funds for wolves. I have to lobby for all the other environmental issues just to keep me on the land. You have plenty of wildlife defender and environmental groups that want these animals, the government wants them...pay for it."

This year, three wolf packs with a total of around 16 wolves, are roaming his ranches, which include a mixture of private, deeded, state and federal land. With three packs on the property Dobson said he doesn't know what to expect.

"Right now I have three packs on me and they're all going to be competing for this area so I don't know what's going to happen this summer," Dobson said. "All three packs will not stay, they're going to compete for the area."