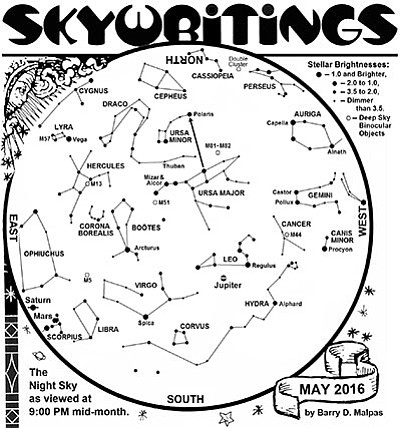 Mercury is the smallest and closest planet to the sun. It has a density similar to that of Earth, but with a diameter about one third of Earth's.

In fact it is only about 1.4 times the moons diameter. And, much like the moon, it has a rocky make-up, with a surface topography which is greatly cratered, having been impacted by asteroids over several billion years. Mercury's year is only 88 days, rotating about the sun a little over four times for every Earth year. Although, small, dense and fast, Mercury has had an interesting and useful history with respect to scientific discovery.

When Galileo Galilei directed his small telescope to the heavens in 1610, he discovered that both Mercury and Venus, like the moon, had phases. This, along with his observations that there were moons orbiting planets other than Earth, and a variety of other discoveries, suggested that the sun centered solar system of Copernicus, as opposed to the then accepted Earth centered one, was correct.

But, many questions remained: what were the dimensions of the planets; what were their distances to Earth; and, what was the actual size of the solar system?

One of the ways to get better measurements of Mercury was to observe it against the disk of the sun as the planet passed between the Earth and sun during a transit. Because of the orientation of the orbits of the Earth and Mercury, Mercury transits only occur every seven and a half years, on average.

Because Mercury was so close to the sun and very bright, it was difficult to determine its size by normal observational means through the telescopes of the time. However, by observing it when it passed between the Earth and sun, transiting the solar disk, it would be much easier to determine its dimensions.

The first time a Mercury transit was successfully observed with a telescope was on Nov. 7, 1631 by the astronomer Gassendi who was able to take fairly accurate measurements.

Scientists of the time were astonished because Mercury had appeared much smaller than had been expected. This seemingly simple measurement was the first indisputable quantitative measurement of the apparent size of a planetary disk. The results shook the astronomical community. Combined with the principle of parallax this measurement expanded the size of the known solar system, as well as changed the accepted sizes of the planets.

Over time it was observed that the elliptical orbit of Mercury changed about 1.6 degrees per century relative to Earth. In 1859, the French astronomer Le Verrier reported that this slow "precession" of Mercury's orbit around the sun could not be completely explained by Kepler's Laws of planetary motion or by perturbations by the known planets.

Many theories were suggested, including the possibility of another planet closer to the sun perturbing Mercury's orbit. However, none was ever discovered, and all other scientific suggestions fell short in addressing the problem.

It wasn't until Albert Einstein published his theory of General Relativity in 1915 that the dilemma was explained. Instead of other objects possibly affecting Mercury, scientists should have been looking at space itself.

Einstein postulated that mass warps space and time. The greater the mass, the greater is the warping effect. Because of the large mass of the sun, and Mercury being so close to it, the effect was highly noticeable. The consequence is appreciably much smaller with the distance from the sun to the other planets, but because of Mercury's close proximity this strange precession effect became visible as soon as people started paying close attention. Einstein's dead-on precise calculation of Mercury's precession is one of several astronomical observations that he accurately predicted that has given acceptance by the scientific community that Relativity is scientific fact.

Mercury will pass in front of the sun's disk on the morning of May 9 and will already be in progress at sunrise (5:34 a.m.). The greatest transit (mid-way across the sun's disk) will be at 7:58 a.m. when the sun will be 29° above the horizon.

It will begin egress at 11:39 a.m. and end three minutes later when the sun is 70 degrees above the horizon.

People can observe this event by projecting the image of the sun onto a piece of white cardboard through a pair of binoculars or a small telescope. The small black dot on the sun's disk is Mercury.

You can also easily record the event by photographing the projected image with a digital camera or cell phone.

However, never look directly at the sun through binoculars or a telescope. You will burn your retina and be blinded.

Members of the Coconino Astronomical Society, in conjunction with the city of Williams, will put on a Star Party from 7:30 to 9:30 p.m. at Glassburn Park in the natural area west of Rod's Steakhouse parking lot. Several large telescopes will be on hand to view the moon, planets and other celestial objects.