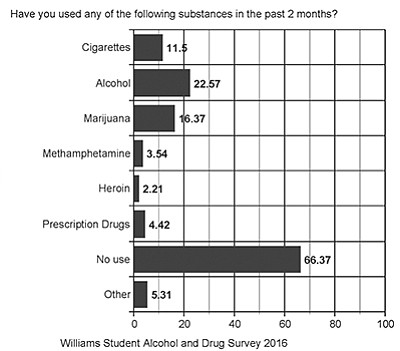 WILLIAMS, Ariz. - Drug testing of athletes and other students in extracurricular programs has been put on hold until next year at Williams High School.

Williams Unified School District (WUSD) Governing Board members made the decision after hearing an update from WUSD Athletic Director Phillip Echeverria at their April 28 meeting.

Echeverria recommended the board allow the committee to have more time to discuss the idea with community members before developing a program. He said many in the community are interested in doing more to combat drug use at the high school, but were unsure of how that should be done.

"From my numbers I think we're somewhere around 65-70 percent in favor when we look at the community," Echeverria said. "I think it's something the kids are ready for. I'm very proud of the kids. I think they're ready to take it head on."

School district employees surveyed Williams students in April and found that 65 percent of students were in favor of random drug testing. The survey also found that 70 percent did not think there was an alcohol problem at the school, but 52 percent believed there was a drug problem.

Echeverria said the committee found the issue more complex than what was initially thought. He said the program is more than just testing a student and then removing them from a program when they return a positive test.

"Some were thinking of it as punishing kids and we were wanting to kick kids out and not help them, but that was never our idea," Echeverria said.

Echeverria said the committee met with the Williams Alliance, a drug prevention organization in Williams, to look at possible drug treatment options and other programs available for students who return positive drug test results.

"One of the big hang-ups within the committee was what is the school going to do when a kid tests positive," Echeverria said. "Some people wanted counseling help and wanted the district to help with that somehow. We all live here in Williams and know that it's tough for some families to even find money for food sometimes."

Echeverria said he is hoping a drug testing program doesn't just catch students who are doing drugs, but also prevents students from taking drugs at all. He sees it as an opportunity for kids to help with peer pressure.

"We're looking into this as a deterrent to kids," Echeverria said. "One of my concerns is the amount of pressure that is out there. It gives a kid an out. He can tell his friends 'I'm not going to do that stuff because I'm choosing to play sports and could get drug tested.'"

Echeverria said he and Superintendent Rick Honsinger had been contacted by various media outlets about the district's decision to look into random drug testing.

"We received several phone calls from news channels," Echeverria said. "They were wondering what was up. They just assumed we have a drug problem up here, but no, we don't have any more of a problem than any other district in the state. We're just trying to get out in front of something and if we help four or five kids, I think it's well worth the money we invest into it."

Echeverria said he was hoping to have something more concrete by the end of the school year, but found there was more to be done before a decision could be made.

"One of the low points was when a comment was made in the committee that it's going to take another major tragedy in Williams for the community to care about it (drug use)," Echeverria said. "I'm not sure that's how the community is looking at it. I think everyone (on the committee) is in favor of a testing policy but they were just unsure of what goes forward following this."

Echeverria said he is grateful for the community involvement in the discussion and praised the coaches and teachers for their input.

"I'm proud of the coaches and teachers who are talking to our athletes and students every day about the hazards of drug use," Echeverria said. "They're going to continue that until we complete our plan."