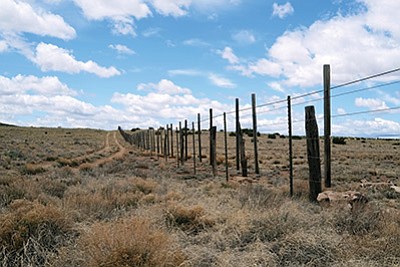 A wildlife friendly bison fence is being constructed at Raymond Wildlife Area. The specific spacing of the stay posts keep the bison away from the fence. Loretta Yerian/WGCN

GRAND CANYON, Ariz. - The American Bison has been a part of American history for centuries.

Considered a sacred animal to many Native American tribes, a primary food source and livelihood for Natives, trappers and later buffalo hunters, the America Bison has stood the test of time and prevailed. Now in a national effort to preserve genetically pure bison lineage, Arizona is joining a national effort to create a conservation bison herd.

In 1800, it was estimated there were forty million bison, by 1883, there were few wild bison in the United States - most were in Yellowstone National Park. By 1900, there were less than a thousand left in North America. The majority of the forty million animals were killed in a fifty-five year period, beginning in 1830. Many people denounced the slaughter; few did anything to stop it, according to the National Park Service. A small, devoted group of conservationists managed to save a few hundred. The bison at Wind Cave are descendants of the last herd.

In 2015, the Arizona Game and Fish Commission signed a memorandum of agreement with the U.S. Department of Interior, National Park Service and Wind Cave National Park (WICA) to establish a Plains Bison Conservation Herd, with WICA genetic lineage, at Raymond Wildlife Area (RWA) east of Flagstaff.

The commission-owned location was identified to be part of a national effort to conserve bison lineages having high genetic purity, genetic diversity and rare bison genes. By October 2017, a herd of 60 bison will be transported from Wind Cave and make their home at the wildlife area.

"What is special about the Wind Cave Bison is that this herd has remained pretty much genetically isolated," said Craig McMullen, regional supervisor of Arizona Game and Fish Department (AZGF) in Flagstaff. "It's a member of a strain of bison, one of very few, that's known to have some very valuable and rare allele (variant form of a gene) that hasn't been mixed with other strains. There are very few strains that have been known to be genetically pure."

AZGF manages two herds of bison, one at House Rock, east of the Kaibab Plateau and the one at Raymond. Both herds are descendants from an unsuccessful bison-cattle, cross-breeding effort more than 100 years ago. Results of genetic testing show that both herds have high levels of cattle DNA, as do most remaining bison lineages.

"The Raymond bison have a lot of the same genetic makeup as the animals that are in Grand Canyon (House Rock bison that have migrated to the North Rim)," said Shelly Shepherd, information and education manager with AZGF. "Arizona bison have the highest percentage of cattle gene, although physical attributes and behavior are all bison, they don't look like cattle at all. They look, smell, act, breed and breathe like bison. They are bison."

Right now there are around 45 bison crossed cattle living at RWA. By fall of 2017 that herd will be eliminated through established hunting practices already in place by AZGF.

"We are replacing the whole herd," McMullen said. "We're about half way through standing down the current herd, we've removed all of the bulls so they won't breed this year. We expect to have the calves hit the ground soon and harvested by September 2017, those would be the last ones we do. Then we will receive the new bison in October 2017.

Game and Fish announced plans to reduce the Raymond herd in October 2015 during a bison workshop at the wildlife area.

Game and Fish said the public has been understanding of why the current herd needs to be removed.

"We really wondered if we were going to get some backlash," she said. "We really haven't and when we had people here for the workshop and we got to the part where we were going to be reducing the herd and removing them from the area there was surprise but as (the biologist) explained it, everybody was like, 'yeah, we get it.'"

AZGF offers bison hunts at RWA in the spring and the fall. For spring 2016 around 22 bison were hunted at RWA. Hunts were slightly longer this year with tags offered for bulls, cows and yearlings. Bison tags are considered 'one in a lifetime,' hunts, meaning you can only legally hunt one bison in a lifetime.

Some, but not all, animal species at RWA are hunted. In addition to bison the Raymond's 15,000 acres is also home to elk, antelope, mule deer, coyotes, bobcats, wildfowl and other bird species.

Funding for management and upkeep at Raymond comes from Habitat Partnership Committee (HPC) grants, a state program that collects money from big game raffles. Shepherd said tags can raffle for hundreds of thousands of dollars for trophy hunts. Bison tags at Raymond are included in the raffle.

RWA manager Steve Hymer helps conduct the hunts. He is also responsible for preparing RWA for the Wind Cave herd. The Wind Cave bison will be transported in stock trailers and will be kept in a 127-acre pasture before being released onto Raymond. The new herd will be young bison and will be evenly separated in a 50-50 male to female ratio.

While supplemental feeding has taken place at Raymond, game and fish said there is enough grass on the wildlife area to support the bison herd. Water is not an issue either since the department uses freshwater ponds and well water when necessary to supply the herd.

Shepherd said the department does plan to continue hunting practices at Raymond after the Wind Cave herd matures but most likely will not offer hunts in 2018.

Because bison can cause problems on surrounding cattle ranches and private property, including damaging fences and gates, disrupting cattle operations and consuming vegetation, a bison fence is being constructed around RWA.

The wildlife friendly fence has a smooth top and bottom wire and every two to three feet a four to five foot tall wooden stay (post) has been placed. According to Shepherd, the spacing of the posts is enough to keep the bison from jumping the fence.

"It's an interesting visual thing and for some reason bison will not attempt to jump it," she said. "They will jump over fences to get out but whatever that is visually, with the stays, it is actually keeping them in."

According to game and fish, the American Bison is different from the common definition of buffalo.

"Cape Buffalo and Water Buffalo are really your true buffalo, everything else is a bison," Shepherd said. "Everybody has just called them buffalo over the years."

Physical differences between the old world buffalo and the American bison include large shoulder humps on the bison. This hump, along with a broad, massive head, short, thick neck and small hindquarters give the animal its rugged appearance. One of the largest pure American bison herds can be found in Yellowstone National Park. There are other smaller genetically pure bison herds sprinkled across the U.S., including Turner Ranch in New Mexico. Some ranches raise bison for the meat, while others are focused on maintaining conservation herds.

"Our mission at Raymond is to provide outdoor recreation opportunities for people and that includes wildlife viewing, getting outdoors and, of course, hunting opportunities," Shepherd said. "In all those opportunities we value wildlife and look at wildlife and we want the public to do the same thing."

Raymond hopes to reach 100 bison from its Wind Cave herd and plans to participate in an exchange of bison with other conservation herds in order to maintain the purity of the bison gene.

"Really this is about that idea that there is special attention being delivered to manage these few linages that are exceptional. Wind Cave is one of them. We have the infrastructure and ability to contribute to that effort at Raymond," McMullen said. "In order to have a true breeding population (WICA) needs to have somewhere of a high side of a thousand breeding age adults. In order to have a thousand breeding age adults, your total population has to be about 1,500. They can't house that at Wind Cave National Park, so they're looking for places to spread this breeding lineage out where they remain genetically distinct and not suffer crossbreeding and also to prevent any sort of catastrophe from imperiling that lineage."