Youth soccer and baseball sign-ups on now in Williams 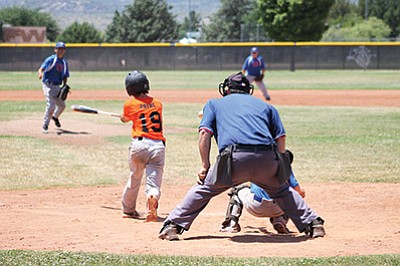 Kolby Payne has a hit against Camp Verde in a previous season game. Wendy Howell/WGCN

WILLIAMS, Ariz. - Spring and summer youth sports programs in Williams are gearing up. Little League baseball and softball sign ups are underway with the season set to begin the first week of April and AYSO Soccer sign ups have begun.

Little League tryouts for the 9-12 year-old boys and girls teams is March 26 at Cureton Park and sign ups for the other divisions is ongoing.

"We need parents to sign up their kids soon so we can divide the teams and get started," said Williams Little League President Sue Pearson. "Flagstaff and other communities have already begun their seasons."

Youth ages four to 18 are also encouraged to sign up for the AYSO soccer season that runs from June 11 - Sept. 3.

"I'm excited for the season," said AYSO Williams Coordinator Susie Daly. "We had a good response last year but the more kids we can get involved the better."

Daly said the program has been strong in the past but the program went without a local coordinator for a few years and the number of kids participating dropped. Daly said she has stepped up to ensure the program stays going in Williams.

The Williams teams will be a part of the Flagstaff AYSO program which also includes the Grand Canyon.

"We have permission to use the school fields," Daly said. "We know for sure that we will be doing some games in Williams this year. Most of them will probably still be in Flagstaff though."

Daly said all of the practices will be here in Williams.

"We desperately need coaches and referees," Daly said. "Referees can be as young as age 10."

"We will bump kids up if there are not enough at the younger ages," Daly said.

Daly said the teams will be formed in May and coaches will start practices at the end of May. The first games will be in mid-June.

"There is a week or two where there is an overlap with baseball," Daly said. "But the coaches are really good about it. They will try to coordinate practices around the kids who are in baseball."

Registration for baseball, softball and t-ball is $40 and can be done online at www.williamslittleleague.com.

Registration cost for soccer is $85 which includes a uniform shirt, shorts and socks. Those interested can register at www.eAYSO.org and need to sign up for the Flagstaff/Williams Region.