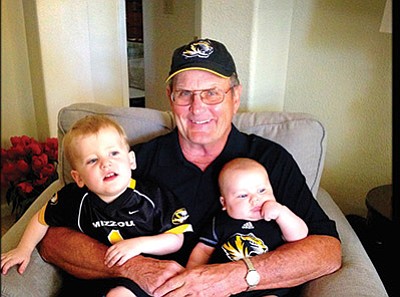 Roger Louis Short, 70, of Prescott, Arizona, passed away on March 9, 2016. Roger grew up in St. Louis, Missouri, where he later met and married Pat, his wife of 40 years. They moved to Arizona in 1976 and lived in Apache Junction, Williams, and then Prescott. He was a lifelong educator, working as a teacher, coach, and school administrator for over 40 years, including serving as the Superintendent of the Williams and Prescott school districts. He was passionate about sports, especially golf and football. Some of his fondest memories included playing offensive tackle for the University of Missouri. He was a lifelong fan of the Cardinals, first in St. Louis and then in Arizona. Roger was a devoted family man and took great joy in traveling with his wife and spending time with his daughters and grandchildren. He was deeply loved and will be missed by his wife, Pat; two daughters, Megan Bess (Michael), Alison Shaw (Jeff); and grandsons Maxell Roger and Zachary Ryan Bess.

Services were held in Prescott. The family wishes any donations be made to the American Heart Association (donatenow.heart.org) or the charity of your choice.