No slowing down: Vikings baseball and softball hit the road 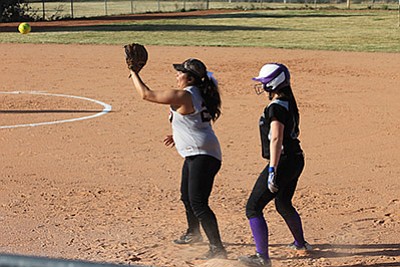 Frenchesca Pennington waits for the throw to first during an earlier season game with Sedona. Wendy Howell/WGCN

WILLIAMS, Ariz. - Vikings baseball and softball players had little time to relax over spring break as they hit the road for a series of games.

The Lady Vikes played in the Needles softball tournament followed by games with Fredonia and Red Mesa over the break.

The Lady Vikes played a series of tough games during the Needles tournament facing much larger schools. They lost to White Pine (10-3), Pahrump Valley (17-2) and Needles (17-1) March 10-12.

The girls are now 2-5 on the season and will face Chino Valley at home March 24 at 1 p.m for junior varsity and 3 p.m. for varsity.

The Vikings baseball team also played a series of games over spring break and finished the week 5-3 to bring their season to 7-7.

Joe Zabala went three for four, Payce Mortensen, Alex Galvan, and Mario Martinez went two for three and Brinkworth went two for four in the game against Fredonia. Zabala was selected as player of the game.

The Vikings faced Alchesay at home on March 22 and next play Chino Valley at home March 24 at 1 p.m. for junior varsity and 3 p.m.for varsity.