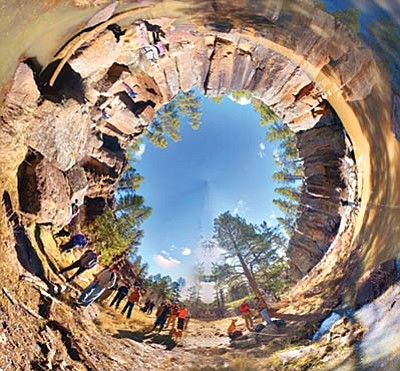 Hikers visit the falls and petroglyphs at Keyhole Sink in March as captured by Google Camera and the Tiny Planet app. Forest archaeologists are using advanced technology to record and monitor archaeological and historical sites across northern Arizona. Photo/Neil Weintraub

WILLIAMS, Ariz. - Local archaeologists are using 21st century technology to document and monitor ancient cultural sites dating back to as early as AD 700.

With more than 6,000 archaeological and historic sites on the Kaibab National Forest, archaeologists stay busy monitoring and preserving these historic treasures. The majority of these sites are associated with the Cohonina, who occupied the Kaibab over 1,000 years ago. They left stone houses, pottery shards, stone tools, grinding stones and rock art across the forest.

Until recently much of the monitoring of these sites was done by observation, sketches and still photography. As newer technology has become available, archaeologists are attempting to use it in their monitoring efforts.

Kaibab National Forest archaeologist Neil Weintraub is one of these archaeologists and has begun using panoramic video and photography apps available online to monitor and document the archaeological and historical sites across northern Arizona.

"We've started documenting these sites with Google camera and the Tiny Planet app," Weintraub said. "This is much bigger than just art."

Weintraub said the Google camera and Street View app has opened up these archaeological and historic sites to people who have accessibility problems as well as giving archaeologists another tool for monitoring these sites.

"It's giving you the landscape view that a particular site has," Weintraub said.

The photosphere allows photographers to take sequential photographs that are stitched together by the software to create a 360-degree panorama that can pan and zoom. The photosphere can then be uploaded to Google maps and be linked by location.

The photosphere captures the archaeological or historic site as well as the surrounding environment such as the view, surrounding vegetation and other nearby ruins.

"It captures the whole site in some cases and gives us more meaning of why that site is there," Weintraub said.

Weintraub said recent fires and mechanical forest thinning have opened up the viewshed near some of these sites.

"There are so many more trees on the forest today that we really don't get a sense of what that landscape looked like 1,000 years ago," Weintraub said. "We know the tree density was a lot less. So when we've seen the forest opened up from some of the areas where there are these pueblos you can tell they had a straight view of the peaks. We know the view was exceptionally important."

Weintraub said he and other archaeologists are using photospheres as another tool to document sensitive and nonsensitive sites across northern Arizona.

"Usually we do sketch maps," Weintraub said. "We would just sketch the rocks and vegetation but this is a great way of capturing that because you can get that 360 degree plan view. We can use this tool for close up monitoring and over time we can overlay the images to monitor. It's a quick and inexpensive way of doing it."

Kaibab National Forest has recently created a webpage that is an interactive display of the archaeological and historical sites of the area at www.fs.usda.gov/main/kaibab/learning.

The links on the webpage open up several photospheres taken by Weintraub that allow users to experience some of the sites online.

Weintraub has been hosting an archaeological lecture series throughout the month of March at Café 326 in Williams. He has shared new techniques archaeologists are using to document sites and well as sharing new discoveries made in 2015.

The next lecture is March 24 at 6:30 p.m. at Café 326. The discussion will be about how Kaibab staff managed the 2015 Rock Fire to reduce the threat of wildfire in areas with sensitive historic Native American sites.