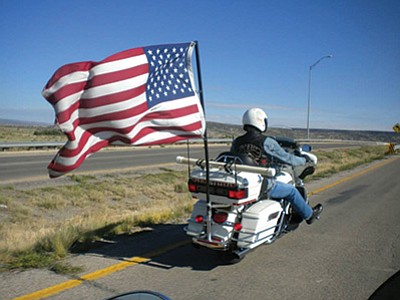 WILLIAMS, Ariz. - The third annual Nation of Patriots Tour is coming to Williams July 22 for the national passing the flag event.

Motorcycle riders and supporters are raising awareness and seeking donations to assist veterans from the last three military campaigns who are in need. The tour passes through 48 states and draws in hundreds of motorcyclists. The riders carry the flag across the country for 100 days, passing it off between states.

The Nation of Patriots is a volunteer organization that raises money in each state through donations.

"All of the donations raised in Arizona will stay in Arizona and will be paid directly to the veterans who need it," said Arizona Nation of Patriots Vice-Chairman Rick Bitzer.

The group requests a minimum $5 donation to join the flag escort as it crosses the state. The group also asks businesses to place donation canisters, posters and flyers for the tour.

"We hope to spread the word statewide for riders and businesses to help us take care of those in need who have protected us from foreign aggression," Bitzer said.

The flag and riders will arrive in Arizona July 22. The first official stop will be at the Elks Lodge in Winslow. There will be refreshments and the city will have a recognition ceremony for the tour and riders. Riders are invited to join the group from New Mexico and continue the escort.

After the event the group will leave Winslow for Bellemont where a flag exchange will take place along with a celebration at Grand Canyon Harley Davidson.

At 4 p.m. the flag and riders will leave Bellemont and continue to Williams where the group will spend the night.

There will be a dinner for all participants at the Wild West Junction, which will include chicken, beef brisket, beans, dessert and entertainment for $20 per person.

"There will be some entertainment and if I know John, some surprises that will make the night very entertaining," Bitzer said.

On July 23, the American Legion of Williams is supplying breakfast for the riders.

"They do not charge but please remember them at the tip jar," Bitzer said. "This is from the generosity of their hearts for our patriots and supporters."

At 9 a.m., a remembrance service takes place at the Williams Memorial Park with Pastor Joe Oswald from Williams Baptist Church and the American Legion. There will also be guest speakers and presentations.

At 10 a.m., the group will honor and thank the city by doing a flag tour through downtown Williams.

"We want to thank the city for their support and hospitality," Bitzer said.

At 10:15 a.m., the riders and flag will depart Williams for the next flag hand-off in Las Vegas.

The Nation of Patriots tour can be followed at www.arizonanationofpatriots.com. More information is available from Bitzer at (928) 600-2063.