From the ADOT archive: A closer look at U.S. Highway 89 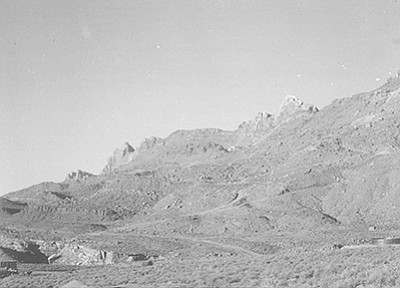 Historic photos from the U.S. Bureau of Reclamation taken in the late 1950s when crews were working to realign and repave the portion of U.S. 89 from Flagstaff to Utah. Photo/courtesy of ADOT

HIGHWAY 89, Ariz. - Mid-February marked three years since a landslide ripped through US 89 about 25 miles south of Page, forcing an extended closure.

Much has happened in those three years, including paving a bypass route, completing some pretty major repairs and reopening this stretch of US 89.

It turns out that the need to establish a direct route between Phoenix and Prescott played a big role in U.S. 89's early history. According to the report, in the late 1800s and early 1900s, there were four roads for travelers to choose from between the two cities.

That led to some discussion in the 1920s over which of those routes would receive funding to become a U.S. highway. According to the report, the government ended up authorizing construction of the 16-mile White Spar Highway south from Prescott toward Wickenburg, and it became the favored route for the new federal highway. Soon after, the highway got a name.

"U.S. Route 89 was part of the first group of highways given numbers by the U.S. Bureau of Public Roads in 1925. At first the number was just used for the road connecting Flagstaff with central Utah. Within two years, though, it had been attached to a string of roads all the way to Nogales."

That's right. US 89 once traversed the state from north to south. According to the report, in Arizona U.S. 89 stretched from the border at Nogales and through Tucson to Florence before veering west through Mesa and Phoenix to Wickenburg. There it climbed Yarnell Hill, up to Prescott. The highway continued north through the country.

Of course, we now know that the north-south connection through the state once served by U.S. 89 has since been taken over by Interstates 19, 10 and 17.

The state's highway system has transformed over the years, as you can tell from the photo below. They were taken in the late 1950s during a time when crews were working to realign and repave the portion of U.S. 89 from Flagstaff to Utah. According to the report, this work was needed to support the construction of Glen Canyon Dam on the Colorado River.

If the terrain in the photos looks familiar, it's because they were taken near the site of the 2013 landslide. More recent photos and more information on Arizona's transportation history is available at AZDOT.gov..