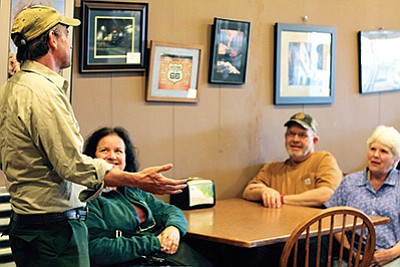 WILLIAMS, Ariz. - March is Archaeology month and the Tusayan and Williams Ranger Districts along with North Kaibab representatives are presenting a series of talks and hikes.

Presentations by South Kaibab Zone Archaeologist Neil Weintraub and other members of the Forest Service are being given every Thursday at 6:30 p.m. throughout March at Café 326 in Williams.

On March 10 Weintraub gave an update on projects the Forest Service has worked on in 2015. Weintraub also gave a special sneak peek at a new documentary about the relationship between the Forest Service and Hopi Tribe. The 10 minute film highlights work being done between Hopi elders and Hopi youth on spring restoration projects on the North Kaibab. Weintraub said the film was finished the first week in March and the viewing March 10 was the first time it was shown to an audience.

"It's really well done, filmed on the North Kaibab on the north side of the Kaibab and I think people are really going to like it," Weintraub said. "The film talks about spring stewardship and restoration on the Kaibab. The work was done last year and we finished it off this year."

"(I talk about) how we work with fire fighters to help discover sites during those low intensity sites," he said.

Weintraub talked about four different fires that happened last year on the south side of the Canyon including the Rock Fire and Jar Complex Fire on the Tusayan District.

Weintraub said the presentations often focus on local archaeology and projects but this year presentations cover all areas of the Kaibab National Forest.

"Normally they are about the Williams area but last week it was a general northern Arizona archaeology discussion and this week we focused on all the different districts of the Kaibab - north side, Tusayan, Williams," he said.

One focus of the presentations is how the agencies work together to preserve historic sites.

"We've got a big forest, almost 1.6 million acres and we trust a lot of people to help us protect the historic sites across the forest," Weintraub said. "(There is) interagency cooperation, especially when we have fires and we across the borders of Grand Canyon National Park on a number of projects."

The final lecture, which takes place March 24, features Weintraub and Hangan together speaking about "The Rock Fire: Using Fire as a Tool to Help Protect and Preserve Historic Native American Sites." They will discuss how Kaibab fire staff managed the 2015 Rock Fire to reduce the threat of wildfire in an area with numerous significant historic Native American sites. They will also show the video "Keeping Fire on the Ground: Resource Specialist Perspectives on the Kaibab National Forest."

Weintraub encourages hikers to bring boots and warm clothing, since the 1.5-mile roundtrip hike will take place regardless of weather conditions. Weintraub said he expects the waterfall will be flowing during the hikes since the region has received so much winter precipitation.

"Be prepared to get wet as a waterfall often cascades off the lava flow requiring crossings in ankle deep water to access the petroglyphs," Weintraub said.