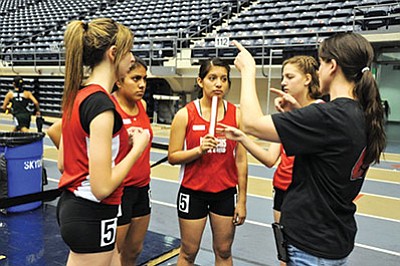 "I think some of it was what the kids saw last year, for example we have four sophomore returning from last year and I think they kind of talked it up with their classmates," she said.

The team is made up largely of sophomores and freshman with a smaller percentage of upperclassmen.

"There's just a few juniors and seniors but we welcome them, it's a big group and they've got a lot of positive energy," Perkins said. "It's just a really fun group."

Perkins said the team has a lot of potential which she is excited to see play out. She also believes there is a really good chance for team members to qualify for the state track meet in May.

Already the ladies 4 x 400 relay team are mere seconds away from setting a new school record for the relay.

Additionally, last year Mimi Nanacasia was only three inches away from provisional distance and making it to state for shot put.

"She's picked up right where she left off and we're hoping that as the season goes on she'll be able to increase her distance and be able to qualify to go to the state meet in shot put," Perkins said. "We are hopeful with Neegho Kaska in the shot put too, he's returning from last year."

Three of the five athletes returning from last year are participating in field events, including shot put.

The athletes had their first chance to stretch their legs and muscles during their first meet at the NAU (Northern Arizona University) Skydome in Flagstaff March 5. Perkins said it was a good opportunity to measure where their interest were and how they stacked up against other teams..

"We kind of used it as a baseline because most of the kids haven't had any experience in track and so the first month we let them experiment and try out different events," she said. "Then we're going to start focusing them on events that we think they'll do the best at."

"It was so much fun sitting in the stands and having the kids cheer on each other," Perkins said. "It was an amazing feeling and sound ... we were the ones making the most noise from the stands."

This is Perkins first year as head coach for the track and field team. She started last year as an assistant coach after former athletic director Javier Abrego saw Perkins running the track for her own enjoyment. Perkin's daughter also competed in track last year and Perkins said she wanted to make sure the event didn't fall through the cracks after Abrego left earlier this year.

"I didn't want track to fall through the cracks because I love running and my daughter was having some success last year so I went to school administration and asked what we needed to do to get this going," she said.

In addition to her four student managers, Perkins is assisted by Charles Ramirez.

"He is just really good at training the kids," Perkins said.

Students practice every day after school and Perkins encourages them to run on the weekend.

Grand Canyon will compete at seven meets that take place after students return from spring break next week. The next meet is scheduled for March 23 in Sedona for the Sedona Friendship Meet.