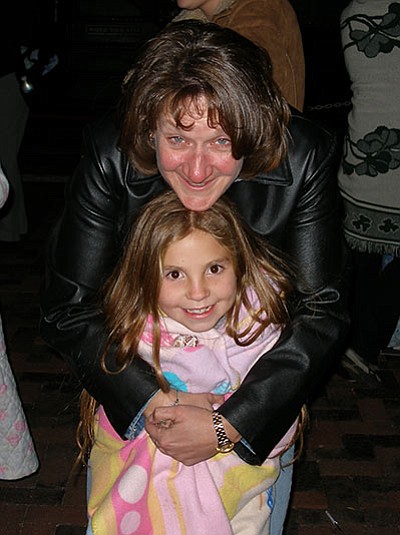 WILLIAMS, Ariz. - The fields are empty outside Williams Elementary-Middle School except for a small group of children and adults gathered on the dirt ballfield north of the school. The children are taking turns launching what looks like a spear out on the field as they cheer each other on.

"It's called the atlatl," said Neil Weintraub, a volunteer for the Big Brothers Big Sisters of Williams. "The Aztecs were actually fighting with these when they were fighting the Spaniards. It was actually used in the Southwest for 7,000 years."

Weintraub and several other adult volunteers, including Williams High School senior Autumn Lann, meet with the children every Thursday at the school to play with them and build relationships. They are part of the Big Brothers Big Sisters school based mentoring program.

The Big Brothers Big Sisters program matches children in second through fifth grade, known as Littles, with positive adult mentors, known as Bigs. The matches start out their weekly meetings as a group to share a snack and do an activity such as working on an art project, doing a the playground speaker or learning soccer.

Then the matches have one on one time together, during which they can do homework, play a board game, or play on the playground.

It doesn't matter what activities the matches do together, according to School Based Mentoring Program Facilitator Kyle King.

"We work on things the Bigs can do with the Littles," King said. "There's lots more kids than there are Bigs. We can always use more Bigs."

"We have several people helping from the forest service," said Weintraub, who is an archaeologist with Kaibab National Forest. "We look forward to the time away from the office to be with the kids."

Weintraub said many of the children seem to really appreciate the time they get to spend with their Bigs.

"It's a fun time for them to be with someone who is big," he said. "I think it's because they get to have a relationship with somebody who is older but is not there to really discipline. It's about having fun."

Weintraub is especially excited about the 2016 spring program. There are several volunteers from Williams High School, including one volunteer who used to be a Little here in Williams.

High school senior Autumn Lann was introduced to Big Brothers Big Sisters when she was in second grade in Williams. This is her first year as a mentor.

"I remember doing this exact thing when I was their age," Lann said. "I loved hanging out and spending time with someone older. I loved having that attention from an adult that wasn't your family member."

Lann has fond memories of her time as a Little. When she was in third grade her family moved to Flagstaff where she continued to participate in Big Brothers Big Sisters. Her third grade mentor was an NAU student who was in a sorority.

"It did a lot for me," she said. "I have great memories of it and to be able to turn around and spend time with someone now is awesome to me. It's fun."

According to Williams's High School Principal Rick Honsinger, Lann is a good student who recently was awarded Student of the Month. She played on the high school volleyball team and is on the yearbook committee. She plans to become an ultrasound technician after she graduates.

"I hope she comes back here sometime," Honsinger said about her receiving the Student of the Month award. "After she goes to college first."

Kaibab Forest employee Deirdre McLaughlin has been involved with Big Brothers Big Sisters for more than 10 years. Lann was mentored by McLaughlin when she was in second grade.

"I keep in touch with a lot of my Littles," McLaughlin said. "I have one who is in his 20s who works for the city now."

McLaughlin said she enjoys seeing her Littles around town and many of them will greet her with a hug.

"Some of them are in junior high," McLaughlin. "And hugging is not cool, but I still get one. That shows you a lot."

McLaughlin doesn't have any children of her own and enjoys the opportunity to spend time with the children at the school.

"You can have the worst day and you come here and play with a child who just needs someone to be there with them and everything goes away," she said.

McLaughlin said the group rarely has to deal with discipline issues, but there are boundaries. The group meets at 3:45 p.m. for a snack and then does a group activity for about an hour. The Bigs and Littles then break into pairs and spend the last hour together.

"Kanyon and I do a lot of things," said Eric Belmontes, another Williams High School student mentor. "He is energetic and likes to run around everywhere, which makes it fun."

The program is an opportunity for at-risk youth to engage in healthy alternatives to various high risk behaviors. Activities on and off-site include visits from guest speakers, field trips, job shadowing, sports and outdoor recreation, as well as other possibilities. Mentors are often just the type of positive influence that a young person needs to realize their own potential and navigate through the difficult teen years.

"Doing this kind of stuff makes me happy," Quintanar said. "School has never really been a thing for me. I just wanted to offer myself to kids somehow and they said I could do this since I'm 16."

Quintanar said she has really connected with her Little and hopes to continue mentoring her in the future.

"It's hard sometimes but I like to keep myself busy," Quintanar said. "This is good for me to do positive things."

Anyone interested in joining Big Brothers Big Sisters can call (928) 774-0649 for more information.