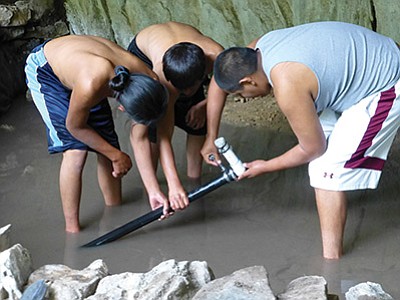 NORTH KAIBAB, Ariz. - The Hopi Tribe and Kaibab National Forest were recently honored with a national-level Forest Service award for their partnership on important springs restoration work on the North Kaibab Ranger District.

Over the course of a week in 2014, Hopi elders and cultural advisers (Hopi Cultural Resource Advisory Task Team) worked with 18 tribal youth from the Hopi Workforce Innovation and Opportunity Act program, Hopi cultural and natural resources staff, Kaibab National Forest leadership and representatives from a variety of other organizations and programs to conduct key restoration actions at two natural springs sites on the North Kaibab Ranger District. Since then, additional phased restoration work has been accomplished, and annual projects are planned for the coming years.

Partners have removed graffiti at Castle Springs and eliminated a decaying corral, rusted barbed wire fence and trash in the area. They have also removed invasive vegetation encroaching in an adjacent meadow, constructed water catchments using traditional techniques for both wildlife and cattle, and built a fence to protect the spring. At Big Springs, a more visible path has been constructed in order to deter visitors from making their own paths, alleviating the spider web effect of footpaths that was damaging fragile soils. And, throughout the project area, Hopi ancestral sites have been restored and protected against potential impacts from recreation and public use.

"This work is important in many ways such as bringing our youth and elders together to promote teaching and understanding; cultural identity and survival; preserving our environment encompassing land, air and water; strong partnerships and sharing of resources between the entities involved; education and employment pathways for our youth; and, understanding better the importance of the spiritual value surrounding all these things," said Everett Gomez, Reed/Bamboo Clan, Paaqavi Village, and case manager for the Hopi Workforce Innovation and Opportunity Act program.

The recipients of the 2015 "Rise to the Future" awards for excellence and leadership in fisheries, hydrology, soil science and air programs were announced in February and included recognition of the Hopi Tribe and Kaibab National Forest for tribal accomplishment related to the Big Springs and Castle Springs Restoration Project, which highlighted the ecological importance of natural springs as well as their cultural significance to tribes.

"I feel humbled and grateful that the partnership would be recognized for its merits and acknowledge that it is but a starting point for continued collaborative efforts in the future," Gomez said.

The Big Springs and Castle Springs Restoration Project was the first tribal-Forest Service collaborative project to be implemented after the 2014 publication of the new Land and Resources Management Plan for the Kaibab National Forest. This was significant because the project put into action two important goals of the newly revised forest plan.

First, it implemented desired conditions for seeps and springs that had been developed collaboratively and identified in the plan. Second, it provided a setting for exchanging information between tribal elders and youth about land stewardship and offered an opportunity for the sharing of traditional ecological knowledge between the tribe and forest, which will contribute to future management actions on seeps and springs.

"The Hopi Tribe and the Kaibab National Forest have been working together for over 20 years, but I feel the work that's taking place through this partnership sets a new precedent for collaborative management of the forest," said Mike Lyndon, tribal liaison for the Kaibab. "These projects are greatly increasing the exchange of technical and traditional knowledge between the forest and the tribe while accomplishing critical restoration projects in places that are culturally important to native people. This has been, and continues to be, a valuable learning process for all of us."

Representatives of the Hopi Tribe and Kaibab National Forest will be presented with their "Rise to the Future" award at a ceremony in Washington, D.C., in May.