Straight from the Rim: What do you think about being able to skydive near the Grand Canyon? 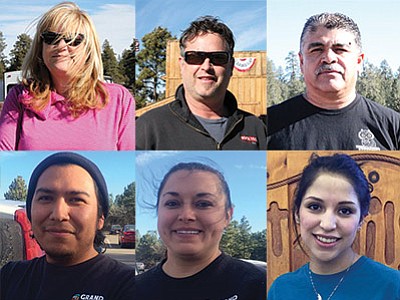 Paragon Skydiving opened its doors March 1 at the Grand Canyon Airport in Tusayan to offer skydiving for the first time near the Grand Canyon. The News took to the street to see what the locals think about this new business and whether or not they'll be participating.

What do you think about being able to skydive near

the Grand Canyon and will you be making the jump?

"If people want to do that I'm sure they'll make money. All you have to do is put Grand Canyon to it and people just seem to love it. I have nothing but respect for a business if they can get it and pull it off. I think it'll be great until somebody dies. It's going to be killer because you have hard core adventure seekers up here and everybody wants that. adrenaline rush. I would if I was young but I don't want any more injuries."

"I just know what it's like to try to do stuff like that in reference to the national park. I mean it would be cool, I'm sure you'd get a pretty cool view of the Canyon - I'm indifferent. If I ever (skydive) I'd do it over the water."

"It will be all right for all of living up here and for the tourists. I would never do it - I have no time, I'm always working."

"I guess it's cool but it makes me nervous. There were how many deaths recently in Phoenix? There's helicopters and all kinds of stuff, it just makes me nervous. I don't know (If I would skydive) maybe if someone I know did it and said it was a great experience, I'd probably try it....face my fear."