Return of the boys of summer: Vikings baseball hits the diamond 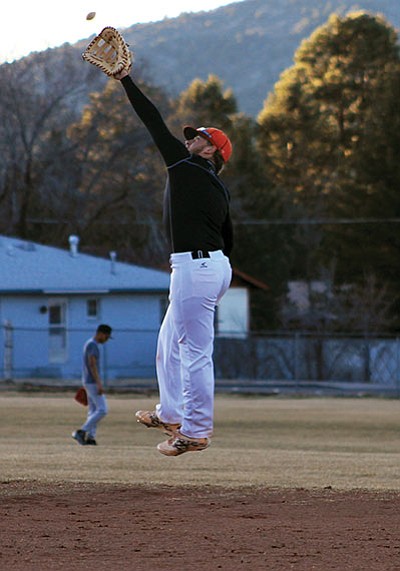 Ethan Johnson lunges for a pop-up at first base. Wendy Howell/WGCN

WILLIAMS, Ariz. - The Williams Viking baseball team finally hit the field this week after waiting for snow and mud to drain off the baseball field.

The Vikings are hoping to regain their former glory this year after a disappointing season last year.

"That was the first season in 10 years that we did not make the playoffs," said Williams High School Athletic Director Phillip Echeverria.

Echeverria coached the Viking baseball team over the past 10 years. He decided to step down from coaching this year to spend more time with his family.

Johnny Hatcher has stepped up to coach the varsity team this year with the assistance of Aaron Anderson and Kevin McElwee. Hatcher said he will miss coaching with Echeverria but looks forward to working with Anderson and McElwee.

"We've been together for ten years," Hatcher said of Echeverria. "It's always hard. I knew what he expected of me and I got it done. So now we will learn how to work together (of Anderson and McElwee). I tell them don't just do what I say. Be creative out there. Do different things with the outfield. I leave it up to them for the outfield. I depend on them."

Hatcher said the team is strong but has a lot of work to do. He said the players have the fundamentals down, but still need work on their plays.

"Most of these kids know how to play, but they've got to learn the game," Hatcher said. "There's a difference between just going out and playing versus knowing what you're doing while you're out there. We've got to get these kids to where everything they do is reaction. So they don't have to think about it. If you have to think it's too late in this game."

Hatcher said the team spent a lot of time running in the first weeks of practice. He said overall conditioning helps in all aspects of the game.

"These kids have got to learn to push themselves to the limits," Hatcher said. "They get to the first limit and they shut down. They won't make it to the second or third limit. That's going to be our emphasis right now, go past your limitations."

Hatcher hopes the extra conditioning will help when the Vikings head south for games in the Phoenix valley.

"When the body's tired, the mind is slow," Hatcher said. "I'm just trying to get them in shape so when we get into the hot weather we don't just peter out. We've got a little bit of energy still left to go."

Hatcher said he has a young team with only two seniors rounding out the field. He said this will be a growing year as he teaches the younger players how to work plays and learn the game.

"I say if you are going to get us, get us this year," Hatcher said. "Because we're going to be really tough by next year."

"The good thing about this year is that we have a few kids pushing other kids," he said. "I think we are too deep at every position where the kids can't just settle in and say this is my position because he's getting pushed by somebody else and that's really good."

The Vikings traveled to Bagdad on Feb. 26 for a tournament and have a big week of road games with Sedona, Camp Verde and Page.