Rangers take Grand Canyon to classrooms across the Southwest 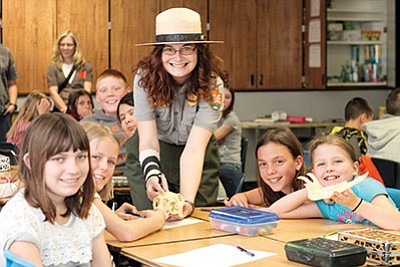 GRAND CANYON, Ariz. - Standing on the edge of the abyss called Grand Canyon is a jaw dropping experience for people of all ages. Some have never had the chance to visit the natural wonder and the next best thing is getting to talk to someone who lives and works there.

Rangers in the Education and Resource Division of Grand Canyon National Park (GCNP) count it a privilege to take the Grand Canyon experience to students around Arizona and the s]Southwest.

Kaylyn Oates has worked for three years at Grand Canyon in the Environmental Education Division. She will spend most of January and February visiting classrooms at schools throughout Arizona through the Classroom Ranger program. She also helps with field trips for students when they visit the Canyon, helps conduct distance learning programs and is involved with Canyon Field Schools, where students learn hands on experiences while backpacking in the Canyon for up to two weeks at a time.

"I've been able to help lots of kids in lots of different ways learn more about Grand Canyon and our national parks," Oates said.

In the first two months of the year Grand Canyon sends out rangers to schools across the state for classroom visits. So far this winter rangers have visited classrooms in Flagstaff, Sedona, both the Hopi and Navajo Nations, Tucson, Phoenix, Prescott, Kingman, Lake Havasu, Las Vegas, Williams and Yuma.

"On an average year we're going to be conducting programs for about four to five thousand students," said Andy Pearce, environmental education specialist at GCNP.

Rangers typically spend several days at each school. Funding for the programs, which are free to the school, are made possible largely through the support of private donors and through the Grand Canyon Association.

"We're really fortunate because we've had tremendous support from Grand Canyon Association, they've been able to get private donors, especially, to donate money to this program," Pearce said. "It's a lot of donations to the park that makes this possible. People see the value in it and that has really made this a possibility."

Oates said seeing students get excited about the material and being able to bring that education back to the Canyon and other national parks is both important and fun for her.

"I think getting them excited about learning something new and connecting that to Grand Canyon is important" she said. "We bring in something different that maybe they haven't learned about and they can connect it to what they have been learning in school. That might inspire them to go up to (the) Grand Canyon to see the real thing."

Rangers focus on several curriculum-based programs all designed with specific learning objectives. These hour long interactive lessons include programs like 'Five Senses' where students learn to use their senses to connect to the natural world, geology and ecology. The course emphasizes adaptations and ecological principles and plant and animal interrelationships and is for kindergarten through eighth grade. Other programs include pioneer history (grades 2-6), Archeology (grades 2-8) and Build-A-National Park (grades 2-6) a two hours long session where students learn about national parks and use art supplies to construct their own model of an imaginary park.

In addition to classroom activities, rangers hold a wide range of hour long assemblies on subjects like 'National Treasures in Your Backyard: Focusing on the role and importance of National Parks' and 'Endangered Species: Introducing endangered species and what parks are doing to help them.'

The goal is for students to learn about national parks and the role they have in the U.S.

Oates also shares what her role is as a ranger.

"(When they see us) they always say, 'you're a sheriff or a cop' so we always say, 'there's all different types of rangers,'" she said. "We do a ranger's career program for older kids too."

Pearce said the program is important because it helps classrooms who may not be able to take field trips have an interactive learning experience without leaving the classroom.

"For so many schools it's challenging for them to go on field trips and yet we feel that it's really important for students to connect with what national parks are all about and to connect directly with a ranger," he said.

Pearce estimated that around 80 to 90 percent of the students participating in the programs have never visited Grand Canyon and most have never been to a national park.

"This is an opportunity to connect them to these places," he said.

The programs have benefits for teachers as well.

"It helps the teachers out because we're able to provide some content and we bring a whole variety of props and things with us," Pearce said. "They are able to help the teachers and the students at the same time."

"These are the things they will remember," said Maya Caldwell, a teacher at Williams Elementary-Middle School. "These experiences that are completely tied in with their surroundings. The rangers were the best people ever to work with. So flexible and easy going about the process and obviously very experienced. Their full time job is to figure out programs to educate kids. So everything they did was exactly geared towards each grade level appropriately."

"I didn't hear a single negative thing. The kids were so stoked to have them come into their classrooms," she added.

Many students attending GCS have one or both parents working at the Canyon, whether directly with the park service or with one of the park's affiliated companies.

Reaching out to their own children is important to GCNP.

According to Pearce the park works very closely with GCS and has developed programs specifically for the school.

"We do a lot with GCS," he said. "We're able to visit there throughout the school year...we actually have a full set of curriculum based programs just for the local school."

Throughout the year the park conducts both in-class programs and field trips for the school. They also participate in career days and offer summer internships for students.