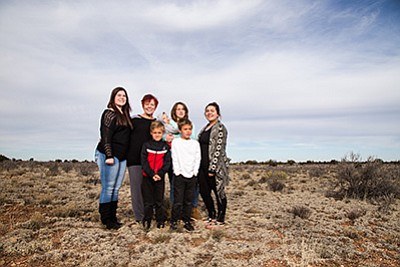 Sue Winchester (center) with her adopted and foster children stand on their property in Valle, Arizona where Bella’s Place will be built. From left: Jessica Ross-Mentor, Gunner, Kaylee and Alexus. Front: Seven-year-old twins Matthew and Gary Bond. Ryan Williams/WGCN

TUSAYAN, Ariz. - Long time Tusayan resident Sue Winchester has a dream. She envisions a home where foster kids can just be kids and can enjoy the bliss of childhood. Where they can be set apart from the worries of adults and decisions beyond their control.

Winchester has named the home, 'Bella's Place' and in order to make it a reality she needs help. Winchester has already purchased three acres of land on the north side of Highway 180 in Valle. What she needs now is help with construction costs to build the home.

The home is named after Winchester's granddaughter, who was kidnapped and murdered in September 2014.

On Sept. 3, two days after she was kidnapped, the body of 8 year old Isabella 'Bella' Grogan-Cannella was found in a shallow grave less than half a mile away from her Bullhead City home. Bella had been playing hide and seek with then 26 year old family friend, Justin Rector. She never came home. Rector, who had been staying with the family, was later arrested and charged with her murder. An autopsy determined Bella had died of asphyxiation by strangulation. Rector is currently being held in a Kingman prison awaiting trial set to take place in October. The defense is asking for the death penalty.

"When this happened I decided I had to turn this negative thing into something that would be worthwhile in a positive way, because that's how I am," Winchester said.

After her sister was murdered, Kaylee took Bella's middle name, Nevaeha. "It's Kaylee Nevaeha - heaven spelled backwards with an a," Winchester said.

Winchester didn't stop there. After Bella's murder she took Kaylee home with her. She already had custody of Bella's other half sister Alexus. When Winchester adopted Kaylee in January, she also adopted Kaylee's baby brother, 8 month old Gunner Cole. Gunner was born in prison after his mother was arrested on drug charges shortly after Bella's death. Winchester took him home when he was one and half days old. Winchester also has custody of 15 year old Jessica, the daughter of one of Winchester's adopted daughters who passed away and seven year old twin boys Gary and Matthew - the sons of her adopted son. The twins came into Winchester's home a week after baby Gunner came home from the hospital.

"I am 62 years old with six kids," Winchester said. "We've really outgrown the place we live, which really encourages me even more to get a home built."

"I want Bella's Place to be there for the kids that need it," she said. "Whatever that is - a loving home. I want them to come and feel safe and secure. That this a place they can come to and just be kids, they don't have to worry about drug addicts or tragedy."

Raising kids is nothing new for Winchester, who had three children of her own, adopted six step children and adopted one son - Bella's father. Winchester's husband passed away in 2009. She now has 62 grandchildren who call her grandma.

Before Winchester can open her home to more children she needs a bigger house and property where children can run, play and enjoy the delights of childhood. After going through a series of inspections and classes, Winchester received her foster care license last year. Now she is striving and working hard to make Bella's Place a reality.

"Right now I have a guy looking at the ground work, you have to see if it perks and all that ... that groundwork is my starting point and its $20,000," she said.

Winchester envisions the house having six large bedrooms, a basement that will be divided into a family/play room and TV room, large kitchen, living room and dining room. She also plans to have farm animals and a vegetable garden on the property.

"There's going to be a wall in (the house) that says, 'Bella's angels,' and has all the hand prints of all the kids that have been involved or from (those who) have donated," Winchester said. "We'll have animals there, which will help the kids learn responsibility."

Winchester said she has already had offers from individuals to donate animals to the home. What she needs help with now is from people who can donate their time or their money to constructing the home.

"Here is where the going gets tough for me," Winchester said on the GoFundMe site she set up for Bella's Place. "I have never been really good at asking for help. However, I do need help to make this a reality. Now I am asking for the children."

"It's my passion," Winchester said. "I thought I could do respite until the two older girls go off to college and then I could take on more maybe. The goal is to get kids back to their parents...in this area and in Williams when kids get taken away they have to take them to other foster care places all over the state."

For every donation to Bella's Place Winchester said she will have stepping stones with each donor's names on it, which will then be placed in the yard. She is also selling 'Justice for Bella' bracelets and plans to sell t-shirts leading up to the October trial with the same logo.

When Rector goes to trial in October, Winchester said she plans to be there and Kaylee, who was there when Bella was murdered, will be there to testify.

Bella's Place is in the process of registering as a 501c3 non-profit organization in order to make donations tax deductible. A GoFundMe account has been set up and can be accessed through Bella's Place Facebook page or at GoFundMe.com.

More information about Bella's Place is available from Sue Winchester at suewinch@msn.com or (702) 420-9403.