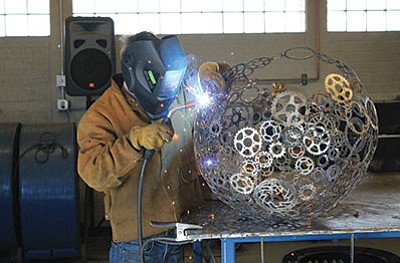 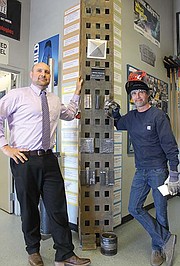 ASH FORK, Ariz. - On a hill overlooking a town of 500 sits a nondescript public school. Nothing seems exceptional from the outside. Grey and brown brick, a juniper hedge, a few dusty school busses. But on the inside is another story.

How has a school like this, with the majority of the residents living below the poverty level, risen to be one of the top ranking schools in the state?

Entering town is the first clue. Next to a sign that says "Flagstone Capital of the World" is a banner that says "Welcome to Ash Fork Home of the State of Arizona's 2014 Highest Performing School District."

The school has become the pride of the community. Once a bustling railroad and ranching town, the town suffered greatly when the Santa Fe realigned the railroad through the area in the 1950s and then again when Route 66 was replaced by I-40 and bypassed Ash Fork entirely in 1984.

With the decline of the railway business and the loss of travelers to the area with the bypass, the population of Ash Fork plummeted. A few ranchers and those in the stone industry have hung on, but in 2013 the estimated median household income was only $24,478, well below the state average of $48,510.

Until 2010, Ash Fork Unified School District (AFUS) mirrored the economic decline of the community. The school struggled for years in state testing and hit a low in 2010 with the equivalent of a D rating from the Arizona Department of Education (ADE) for student performance.

"We were one year away from the state starting to come in," AFUS Superintendent Seth Staples said in a previous report. "We were a failing district..."

Staples said many people had become complacent and accepting that Ash Fork was a failing school district.

"We were a D rated school and nobody expected anything from Ash Fork," Staples said.

Over the past five years however, Staples and his administration have led the district through some changes that have given the school a reputation for being one of the best in the state.

"We have low socioeconomics, we're a school-wide Title I," Staples said. "But we weren't going to let that stop us. We started saying that's okay for other schools, but we're different. We wanted to change that."

Administrators began looking for new ideas to help get the district back on track. Staples began researching other districts that were performing well and began modeling the school after them. The school also received an improvement grant administrators used to purchase the Capturing Kids Hearts character curriculum.

The Capturing the Kids Hearts program helped the school develop social contracts and character standards for each classroom. Students learn to greet visitors appropriately and they shake hands with their teacher every time they walk into a new classroom.

Staples said an improvement in school culture has had a significant impact on academic results in the school. He said the change began at the administrative level and then moved down to the teachers and then students.

Staples said that once teachers could see what the administration was trying to do, they joined the momentum to create a strong learning culture.

"When the teachers got on board and saw that we were serious and then the kids saw how the teachers were trying to do their best then the students began to do the same thing," Staples said.

Staples said the most important but hardest challenge was creating a solid teaching staff. He said the district had to get rid of underperforming teachers before they could move forward with their plans.

Staples said he believes that good teachers enjoy what they are doing. He said Ash Fork pays teachers better than many other districts, but the pay is still low compared to similarly skilled professions. He said the way he retains his teachers is to make them feel important and part of the process.

"If they feel successful then they like to stay here," he said. "We have a few glitches, but we can work through them because we have a common goal. We also have a supportive board (governing) who knows what we want to do. There's a lot of trust there."

In the 2012-2013 school year, the district tied for ninth place on the ADE list of top-performing districts in the state. In 2013, school board member Barry Sharp received the All-Arizona School Board Award. In April of that year high school math teacher Sonny Martin was named Yavapai County Teacher of the Year and middle school language arts teacher Jeaneen Leach was named the county's small schools Teacher of the Year. In the 2013-2014 school year, ADE named Ash Fork the number one performing district in the state. Then in 2014, Staples received the All-Arizona Superintendent of the Year award for small districts.

Although Ash Fork's AzMerit test results in 2015 were not as high as the previous AIMs test results, the school district scored much higher on the tests than most northern Arizona schools. The elementary and middle school students scores were noticeably higher than Seligman, Grand Canyon, Williams and Parks students. Staples said he is pleased with the results, although he hopes to improve next year.

"We already had meetings and we went grade level by grade level and subject by subject and came up with action plans," he said after the results came out. "Our school culture is that we're never really satisfied with our results, we are definitely hungry to improve them."

Staples said he measures school success in other ways beyond test results. He said he sees it as a good sign the district is able to retain their good teachers and that behavioral problems among students is down.

"The year before we started the Capturing Kids Hearts program we had 120 disciplinary referrals, the following year we only had five," Staples said.

Ash Fork School District has used the Beyond Textbooks curriculum for the past five years.

Staples said the change in curriculum has also had a significant impact on academic results in the school. Beyond Textbooks spreads the standards out throughout the year. Teachers instruct the concepts and have weekly assessments of the standards. If a student fails the assessment, they are re-taught the concept and tested again

"We identify the students who didn't master the standards and they work in small groups with teachers to master those standards," Staples said.

Staples said the district used to just follow a textbook for each class prior to the acceptance of state standards.

The Beyond Textbooks curriculum has helped the district develop teaching strategies for the state standards.

"We like the resources that come with the curriculum," Staples said. "The scheduling helped us a lot at first and now we're feeling comfortable enough to possibly develop our own pacing guide."

Staples said an essential part of their success is re-teaching the standards to students who don't pass the assessments.

"In the elementary we have intervention time," Staples said. "So at 2:45 p.m. the students who have passed the standards go home. The others stay until 4 p.m. and take the second bus. They work with teachers and paraprofessionals to work on those standards."

Staples said the students and parents don't mind the extra time required for students to pass the standards.

"It's just part of our culture," Staples said. "It's just how we are. It's not mandatory for high school but most students just come. Many teachers give up their prep time to work with the students."

Ash Fork is on a modified year round schedule where every nine weeks the students take quarterly assessments. The students who don't pass the assessments come back to the school for two full days during the break.

"This is the first year we've done this," Staples said. "We were worried if anyone was going to show up, especially at Christmas break. But we had 85 percent attendance rate. I think it again comes from the culture that we've created here. We teach that you need to be successful and if you work hard you can do it. So the students even shock me."

"It is one of the ways that Ash Fork fulfills its mission of making students college and career ready," Staples said. "We send two busses to Prescott each day so kids can take classes there."

The JTED program allows students to gain skills and in some cases certification in programs such as avionics, culinary arts, computer design, nursing and engineering.

"Many students get certifications that allow them to step right into an entry level position," Staples said.

Ash Fork has its own welding program that is supported by JTED but is located at the school. Many students work with instructor Earl Tiedeman to receive their certification and several have gone on to successful welding careers.

"It gets their foot in the door," Tiedeman said.

Staples said that he and school board members are pleased with the progress made at the school, but acknowledges that administrators still want to improve

"We're not perfect," Staples said. "Our big push this year was high school. Our high school is lagging behind our elementary and middle school. We have worked on team building and have come up with mandatory hours of homework every night."

Staples said the school has had some growing pains with the changes at the high school, but he said that students have risen to the challenge once they have seen where the staff is leading them.

"The teachers are digging into the standard," Staples aid. "We analyze and discuss and that's where you get the higher rigger level."

"I have to give credit to our teachers," he said. "They have stepped up to not only be teachers, but also to be role models for these students."