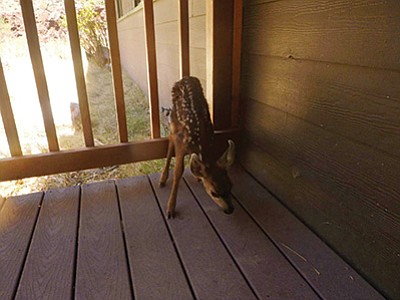 Visitors to Phantom Ranch brought this fawn to rangers, thinking it had been abandoned. Photo/NPS

GRAND CANYON, Ariz. - After visitors at Grand Canyon National Park (GCNP) mistakenly picked up a baby deer they thought was abandoned at Phantom Ranch, the park is reminding the public that wildlife is wild.

"This is a really good time to remind everybody that there are baby deer and elk around right now and if they look like they're abandoned or left alone - they're not. Mom is almost always nearby," said Emily Davis, a spokesperson for GCNP. "She communicates to them using various calls and sounds that we cannot interpret."

According to Davis, visitors at Phantom Ranch, around eight miles below the rim of the Grand Canyon, saw the fawn by itself and said it approached them and they thought it needed help.

"They picked it up, wrapped it in a T-shirt and took it to the Phantom Ranch Ranger Station," Davis said. "The ranger on duty called a Wildlife Biologist on the South Rim asking what to do and he said the mom was no doubt nearby and said to take the fawn back to the location."

Davis said the ranger followed the biologist's instructions and shortly thereafter the mom reunited with the fawn.

According to Davis, this type of incident is rare at Grand Canyon.

"It might happen but we don't hear about it or it doesn't get reported," she said. "This is the first one that has been in the public eye."

Davis said if a baby animal is found, it is best to leave it alone.

"Leave it where it is," she said. "The mother will come around shortly. That's the safest and best thing to do for everyone involved - animals and humans."

Grand Canyon is diligent in posting signs throughout the park to discourage human-animal encounters. More often than not, squirrels and elk are the most common for human - wildlife encounters at the Canyon. Additionally, Davis said during many of the daily ranger programs rangers talk to visitors about wildlife and remind visitors to keep their distance.

"Something we talk about too, especially with larger animals, is to keep a safe distance," Davis said. "A safe distance can be gauged by what we call the rule of thumb. If you extend your arm out in front of your face and stick your thumb up like you're going to hitchhike and completely cover up the animal with that thumb, as you're looking at it, you're a safe distance. If however, your thumb does not cover up the animal, you're too close and should back away."

For your safety and theirs

Grand Canyon National Park is a sanctuary and home for wildlife. View these incredible creatures, but remember that it is illegal and harmful to people and wildlife to approach, feed, handle, capture, or harass any wild animal in the Park. By treating wildlife with respect and not approaching or feeding them, you are helping them live natural lives. By keeping wildlife wild, you are protecting their safety- and yours.

Do not approach wildlife

The wildlife in the park are wild animals- and it is important to treat them as such. Seemingly tame animals are still wild. Many visitors think rattlesnakes and mountain lions are the most dangerous animals in the park. In fact, far more people are injured by elk or rock squirrels because people approached them too closely. View elk and deer from at least 100 feet (30m). You are too close to an animal if your presence causes them to move.

Do not feed wildlife

Feeding wild animals disrupts their lives, and is dangerous for people. Many things we eat are toxic to animals. When animals become used to being fed, they become habituated and no long act naturally. They often become aggressive and will attack people to take food. NPS staff finds it heartbreaking when they are forced to euthanize animals whose aggressive behaviors were caused by being fed by well-meaning people. Animals that are fed from cars congregate near roads, and are at a high risk of being killed by a car collision. Animals that are fed often become dependent on food handouts and lose the ability to feed themselves naturally.

The saying "a fed animals is a dead animal" is unfortunately very true in the Grand Canyon. These animals live here- they do not need human food to survive.

The most dangerous animal in the park is the rock squirrel. Every year, dozens of visitors are bitten when they try to feed these animals.

Many species in the park carry infectious diseases such as rabies, Bubonic plague, or Hantavirus. Viewing wildlife from a distance will protect you from these diseases.

Many animals, including ravens, ringtails, squirrels, and coyotes, have become used to stealing food from humans. Please store your food securely and do not leave food unattended.

You go, squirrel: Give wildlife a safe space to work for the camera
Editorial: The Canyon's wild side
Safely experiencing wildlife at Grand Canyon
Man kicking squirrel off rim of Grand Canyon caught on video
Game and Fish remind public to leave baby wildlife alone
Contact Us
Submit Questions, Comments, or Story Ideas