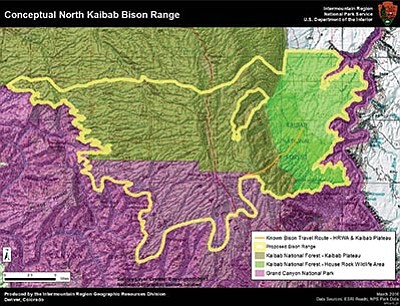 GRAND CANYON - NORTH RIM, Ariz. - According to a recent report by the National Park Service (NPS), a herd of around 600 bison on the North Rim of Grand Canyon National Park (GCNP) are considered native wildlife.

The report is controversial because of the implications it could have for future management and partial removal of the herd from the park. Agencies agree the bison population in the park needs to be reduced because of overgrazing and damages on the North Rim.

GCNP has been studying various strategies for managing the North Rim bison herd for over two years. During that time, the bison population in the park has grown out of control. Classifying the bison as native wildlife would mean bison living in the park, would be managed under NPS's wildlife management policies.

Glenn Plumb, acting chief of science and resource management at Grand Canyon, said as native wildlife, NPS plans to manage the bison under the NPS's wildlife policy for native wildlife.

"We'll manage them as wildlife. We're not going to manage them to get rid of all of them," he said. "There will be no hunting in Grand Canyon National Park. Long-term hunting will continue, as I understand, on National Forest lands."

However, some interest groups, including Public Employees for Environmental Responsibility (PEER), say the definition of "skilled volunteers" is a euphemism for hunters who are selected by the park.

"This plan would turn Grand Canyon into a game farm managed for the benefit of Arizona Game and Fish," said Jeff Ruch, executive director of PEER, in a press release. "Slaughter should not become a routine park wildlife management strategy."

Hunting is not allowed in Grand Canyon, however, the NPS has the authority to kill animals harming resources.

AZGFD supports the report's findings. The department manages two bison hunts, one at Raymond Wildlife Area and the other at House Rock Wildlife Area.

In an earlier press release, AZGF said a key finding of the report that was scientifically reviewed revealed bison in northern Arizona are native wildlife because the area is considered within the long-term continental home range of American bison.

"The Department is pleased with the conclusions in the report," said Craig McMullen, AZGFD supervisor for the regional office in Flagstaff. "The bison are a valuable native component of the experience for visitors to the Kaibab Plateau, but there are too many right now. The ultimate goal is to manage this important bison population at appropriate levels for the enjoyment, appreciation and use by the public."

Plumb agreed and said Arizona is part of a historical range for the bison and said NPS's conservation of wildlife and its management is a major part of what NPS does.

"Ecologists look at how far and wide a species was distributed. In general there is evidence that bison occur in northern Arizona and southern Arizona, within a reasonable time frame. There may not have been bison here in the early 1800s, but there are bison here now," Plumb said. "The NPS and Grand Canyon are in the business of the conservation of wildlife ... it's a core part of the NPS. GCNP is going to manage them, when they're in the park, under our wildlife policies."

Question have been raised about whether or not the bison were native to Arizona.

According to AZGF, the bison are remnants of an experiment in the early part of the last century to create hybrid cattle-buffalo in northern Arizona. When the program was unsuccessful, the animals were sold to the state in the 1920s. Some of the animals were moved in 1950 to the House Rock Wildlife Area, but wildfires drove them out of the area, according to a Federal Register notice. Some of those animals now roam the plateau of the Kaibab National Forest, giving them access to Grand Canyon National Park. While the state manages the herd through hunts, bison that have wandered into the park are protected. There are now around 600 bison that have migrated from the forest into the park.

According to the report, a population goal for the herd is between 80-200 bison. The report said as the population declines, the total number of animals taken annually by skilled volunteers and hunters will similarly decline.

"As a small population at the edge of the historic range, this herd will likely be more vulnerable to environmental stochasticity, long-term genetic loss and random effects on population ecology than larger herds," the report said. "Hence, for the long-term the herd should likely be a satellite of a larger meta-population, with local management that strives to simultaneously protect sensitive resources while addressing near and long-term small population conservation."

The report comes as Congressional lawmakers consider a pair of bi-partisan bills that direct the U.S. Department of Interior and the Arizona Game and Fish Commission to coordinate a plan allowing Arizona sportsmen with valid, state-issued hunting licenses to assist in managing the bison population.

The bills are supported by the Commission and were introduced in the U.S. Senate by Arizona Sens. John McCain and Jeff Flake; and U.S. Rep.Paul Gosar. The House bill is co-sponsored by U.S. Reps. Ann Kirkpatrick, Kyrsten Sinema, Matt Salmon, David Schweikert and Trent Franks.

GCNP is working on a draft Environmental Assessment of the Bison Management Plan for Grand Canyon, which should be completed sometime this fall.