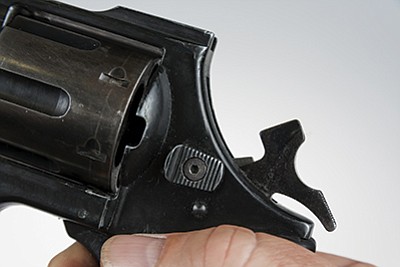 A driver with Cowboy's Service Carriage Company accidently shot a 6-year-old boy outside the Railway. The carriage driver, Josh VanWinkle, told police he had his gun unholstered with the trigger cocked back because a pit-bull dog had lunged at his horse earlier and he wanted to be prepared if it returned. (Adobe stock photo)

WILLIAMS, Ariz. - A 6-year-old boy was injured in an accidental shooting around 7:30 p.m. June 25 outside the gift shop at the Grand Canyon Railway.

According to Williams Police Chief Herman Nixon, Josh VanWinkle, a driver for the Cowboy's Service Carriage Company, accidentally discharged a .357 revolver shooting the boy in the leg as his family spoke to the driver in the driveway in front of the gift shop Friday night.

VanWinkle told officers he had his gun unholstered with the trigger cocked back because a pit-bull dog had lunged at his horse earlier and he wanted to be prepared if it returned.

The family of the 6-year-old approached VanWinkle, who was atop the carriage, to inquire about prices for a carriage ride when VanWinkle attempted to reholster his gun and the gun discharged hitting the boy in the leg.

"He cocked his weapon so obviously he either pulled the trigger, the trigger got caught on something, whatever it is and it went off," Nixon said.

Nixon said officers did not find a dog at the railway when they arrived. He also said no witnesses reported seeing a dog.

Nixon said the bullet was a .38 caliber round that entered the child's leg above the knee and exited behind his calf.

"The positive thing is that (VanWinkle) had practice rounds in there that were solid lead instead of hollow point," Nixon said. "Because a hollow point goes in and explodes and tears everything apart."

Nixon said the child was taken by ambulance to Flagstaff Medical Center where he underwent surgery to remove bone fragments. He is expected to make a full recovery.

Nixon said the victim was visiting from Texas and multiple family members, including several other children, milled around outside the gift shop prior to the shooting.

Nixon said VanWinkle was booked into Coconino County Detention Facility on charges of aggravated assault, child endangerment and disorderly conduct with a weapon.

"Under state laws, if you are reckless handling a weapon and somebody gets injured then you've committed a crime," Nixon said.

Nixon said final charges would be decided by the Coconino County Attorney's Office.

"We have a lot of reports and investigating to do," Nixon said. "When we file it with the county attorney they'll decide whether to file charges."

Nixon said he was concerned about the carriage drivers carrying weapons in Williams.

"Why these individuals are carrying weapons is beyond me," Nixon said. "I don't see any reason for it...Why you would have a weapon out at a hotel parking lot in the middle of summer where we have what, a thousand people? I don't know how many were out at that time but at any given moment you have two or three people out in that parking lot."

Nixon also questioned the reasoning for having a weapon in the railway driveway.

"Even if there was a dog attacking, are you going to fire that weapon at a dog in that parking lot?" Nixon said. "I mean those are some of the things we looked at that just don't make sense. That's why we arrested him because we felt there was no reason for him to have his weapon out and cocked. This shows there were all these little kids running around and one got injured."

Nixon said the city was reviewing their license with the carriage company following the incident.

"He is somewhat of a liability right now with what occurred," Nixon said. "I think the city needs to take a close look at that and determine whether at this point you continue to let them operate in the city or not. I'm not sure what they're going to do with that."