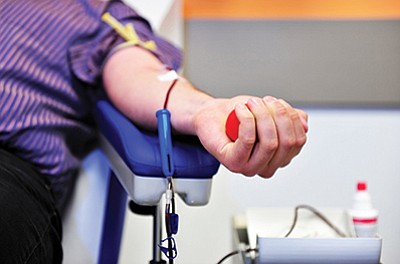 WILLIAMS, Ariz. - One hour. That's all the time it takes to donate a pint of blood.

According to UBS, patient transfusions rates have surged 13 percent above normal levels recently creating a blood donation crisis across the country.

This, combined with plummeting donations since the Memorial Day holiday has created an extra strain on an already lean blood supply, a strain which is expected to last throughout the summer.

"I've worked for United Blood Services for five years and the five years prior to that I hosted blood drives at my previous work place," UBS Senior Donor Recruitment Representative Carina Fors said. "We've never seen it this bad where all blood types are in need."

On June 7 UBS issued a critical appeal for blood donors but only saw a 5 percent increase in the blood inventory.

According to Fors, the agency is continuing their urgent push for donors in hopes of increasing the supply.

"The Independence Day holiday is coming up and that is one of the highest usage times," Fors said. "Typically we need 500 blood donations each day but during this two-week time period it goes up to about 600 blood donations daily."

According to Fors, reserves of blood have depleted to 42 percent below required levels, leaving only a one-and-a-half-day supply on the shelves. Since it takes 24 to 36 hours to test and process each donation before it can be released for a patient, blood is being transfused as fast as UBS can provide it to hospitals.

UBS is the non-profit community blood provider that supplies 100 percent of the transfusion needs for every hospital in 11 of 15 Arizona counties, including Coconino, Yavapai, Navajo, Gila, Apache and Maricopa counties.

According to the American Red Cross, 38 percent of the population is eligible to donate but less than 10 percent actually do.

"In Arizona, sadly, only three percent donate," Fors said. "We have very low donor participation but we have pretty high usage."

Fors said she thinks the low donation percentage is because of a lack of understanding of the need.

"A lot of people just don't put thought into where blood for hospital patients come from," she said.

According to UBS, donating blood is a safe process. A sterile needle is used only once for each donor and then discarded.

Blood donation is a simple four-step process which includes registration, medical history and mini-physical, donation and refreshments. A mini-physical includes checking the donor's temperature, blood pressure, pulse and hemoglobin to ensure it is safe for the donor to give blood.

The actual blood donation typically takes less than 10-12 minutes. The entire process, from the time a donor arrives to the time they leave, takes about an hour and 15 minutes.

All donated blood is tested for HIV, hepatitis B and C, syphilis and other infectious diseases before it can be released to hospitals.

Information a donor gives to UBS during the donation process is confidential. It may not be released without permission except as directed by law.

According to UBS, out-of-state resources to meet local patient blood needs have been exhausted since blood centers across the country are still recovering from the decline in donations over the Memorial Day holiday.

"(The percent of the population eligible to donate) has decreased a bit with this Zika virus crises we are going through as well," Fors said.

According to Red Cross every two seconds someone in the United States needs blood. Approximately 36,000 unites of red blood cells are needed every day in the United States. A single car accident victim can need 100 units of blood. More than 1.68 million people are expected to be diagnosed with cancer in 2016. Many of them will need blood, sometimes daily, during their chemotherapy treatment.

"There is a little 5-year-old girl in Flagstaff that is afflicted with a disease known as Diamond Blackfan Anemia," Fors said. "...she needs a blood transfusion every five weeks. She's only five years old and she up to like 51 blood transfusions. It's just crazy to here of a child going through this."

Fors said Type O blood is typically the most needed blood type, but all blood types are needed during the current crisis.

The Williams blood drive will be in the parking lot at St. Joseph Catholic Church located at 900 W. Grant. More information can be found by calling (877)827-4376.