Morrison chosen as Rookie Principal of the Year 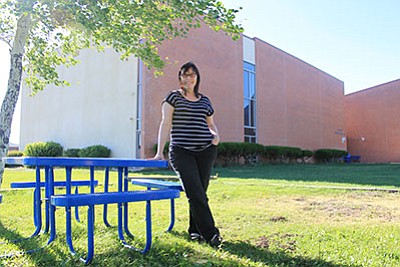 First year principal Carissa Morrison has been chosen as the ASA Rookie Principal of the Year. Wendy Howell/WGCN

The Arizona School Administrators (ASA) organization gave Morrison the honor June 13. Morrison's award comes after the April 20 selection of kindergarten teacher Natalie Mann as a finalist for Coconino County Teacher of the Year.

School principals throughout Arizona select nominees who must be a member of ASA and have been a principal for no more than three years.

According to Williams Unified School District (WUSD) Superintendent Rick Honsinger, the purpose of the award is to recognize outstanding leadership in the school and community by a new principal.

"I could not have chosen anyone better for the Williams Elementary-Middle School principal if I had done the search myself," Honsinger said in his nomination letter to ASA.

Honsinger said the skill that stands out the most in Morrison is her strong work ethic and desire to teach children in rural schools.

"She really has a passion for those type of kids and these type of families," Honsinger said. "Her passion and genuine warmth shows through the staff and through the kids. Anyone can pick that up when they meet her and talk to her."

Morrison grew up in a rural Pennsylvania community. Her plan upon high school graduation was to go to law school, but her love of schools and children changed her college path to education.

"I absolutely love rural schools," Morrison said. "About 25 percent of our nation's students live in rural districts but sometimes they are short changed when compared to urban education."

Morrison most recently worked at Seligman Unified School District as a principal intern and 8-12 grade English teacher from 2009-2015.

She holds a doctorate in E\education from Arizona State University and received her principal certification while interning for current Seligman Principal Jeff Baker.

Morrison had applied for the Williams High School principal position in 2015 but the WUSD governing asked Morrison to consider the position of principal at the elementary-middle school.

"I was eager to learn but I was also a little bit hesitant because I wanted to do a good job," Morrison said about accepting the elementary-middle school position. "And can you do a good job if you've never had experience in that realm?"

Morrison said looking back over the 2015-2016 school year, one of the most rewarding experiences has been working with the younger students.

"I really didn't have the exposure to the kindergarten through fifth grade world," Morrison said. "But it has been one of the most enjoyable parts of the whole year, getting to know and interact with those students. The kids are so open, open to learning and open to being creative and kooky. They make you smile when you walk down the hall."

Morrison said another rewarding experience for her has been the opportunity to support teachers and staff when they have ideas.

Honsinger said the first year as an administrator can be difficult for some people. He said many people come into the position with a lot of ideas and goals that they want to accomplish and find that constraints like budget and time hold them back.

"It's kind of like a closed curtain and you're not quite sure what's on the other side when you're a teacher," Honsinger said. "It can be a little bit daunting and a little bit of a letdown. But Carissa hasn't let that get in her way. She has kept her head up and kept very positive and has a great attitude. She has made a real difference at WEMS."

Morrison said she enjoys the variety of work that comes with being a principal. She likes to multitask and be involved with all the aspects of the school day.

"I initially though that I'd just be helping teachers hone their instructional craft but that's like a dream world," Morrison laughed when describing her initial thoughts of being a principal. "I deal with parents, teachers, custodial issues, nutritional guidelines...all these little details I didn't know I'd be doing. But I like all the different things that come with the role."

Honsinger, who is also the principal of the high school, said being a principal is never boring and every day presents a new challenge.

"You never know what is going to walk in the door," Honsinger said. "Some days you come in and say this is going to be a slow day and you end up with a whirlwind of a day."

He said a good principal rises to the challenges presented each day. He said it is possible to do the bare minimum and just get by or a principal can have ideas and act on those ideas.

"They can put ideas into action and use them to improve the school and take steps above and beyond," Honsinger said. "And that's where Carissa comes in. She just works really hard and she has herself to blame because she has these great ideas and she always acts on them."

Honsinger said Morrison uses her experience as a teacher to help the staff at the elementary school. He said she supports them academically by giving them ideas, resources, her time and her expertise.

"She is a very good educator if you take her outside the principalship," Honsinger said. "She has a lot of ideas. When a teacher has an issue, maybe a child can't learn, maybe a child isn't responding to certain stimulus in the classroom, she'll go in there with real ideas and real possibilities for a solution that a teacher can try."

Morrison said she is already getting excited for the next school year. She said the staff made large steps with teaching to the standards and teaching at higher levels of cognition. She said next year's goal will be differentiated instruction.

"We want the students who are exceeding the standards to be stretched and pushed," Morrison said. "And that's a hard thing for teachers to do. If you have 20 students how do you stretch each one? But that's our goal."

Morrison said she has enjoyed getting to know the students and families of the district and looks forward to growing with them in the future.

"I like to learn people's stories," Morrison said. "I like that connection with students and the staff."

Morrison said she attributes her successful transition to administration to the staff at the elementary-middle school.

"I would not have been nominated for this or selected for this award if the entire staff had not been as strong as they were," Morrison said. "Things were working very smoothly. People were doing good work. So it was relatively easy for me to come in and just support them in their work. The staff is really strong here. The teaching staff, the support staff, every department."

Morrison also praised Honsinger for being a good mentor as she learned the process of being a principal.

"Mentoring a first year principal takes a lot of time and patience," Morrison said. "I always have a lot of questions. And he always treats me kindly and with respect and patience. He's very supportive and understanding. Just that fact that he can find the time is amazing. Everything he said about me in the (nomination) letter is really about him. I'm following his lead."