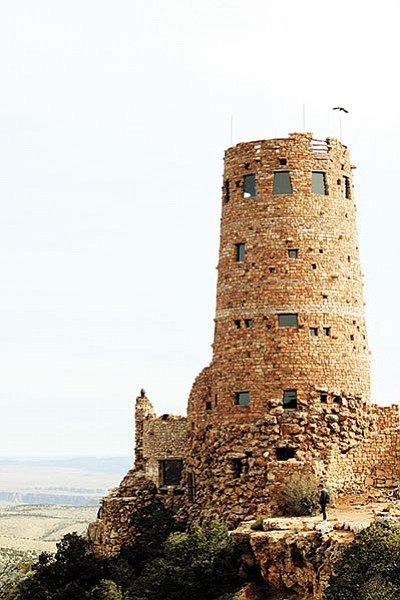 The Watchtower at Desert View on the South Rim of Grand Canyon National Park is one of 20 projects competing for 2 mil in historic preservation. Loretta Yerian/WGCN

GRAND CANYON, Ariz. - On May 25 a national contest to award $2 million in historic preservation funds launched. The iconic Desert View Watchtower at Grand Canyon National Park was one of 20 competing projects for the contest.

The Grand Canyon Association (GCA), the non-profit partner of Grand Canyon National Park, selected the Watchtower as a historic site in need of preservation.

"We need the public's help to save this remarkable national treasure," said Susan Schroeder, chief executive officer for GCA. "We hope everyone votes online every day to help us preserve this important link to the past. They can make a big difference without ever leaving their computer."

The contest is being conducted by Partners in Preservation, a community-based partnership between American Express and the National Trust for Historic Preservation. National parks that receive the most votes will be eligible to receive up to $250,000 of the total funding.

The awards will be determined from the online vote, which runs through July 5. National Geographic will host the campaign at VoteYourPark.org and the public will be able to vote for up to five parks each day during the contest.

Voters will be eligible to enter a sweepstakes for a chance to win a trip to Yellowstone National Park, courtesy of National Geographic.

The Watchtower, a National Historic Landmark, is a 70-foot-high stone building on the South Rim of Grand Canyon National Park. It sits about 25 miles east of the Grand Canyon Village and attracts millions of visitors each year.

Famed architect Mary Colter designed the Desert View Watchtower, built in 1932. The tower was designed by Colter to represent prehistoric Indian towers across the Southwest. GCA said the work is especially significant because Colter worked closely with Hopi artists on the wall paintings inside the tower. Many of the murals illustrate elements and stories important in tribal culture.

The paintings are patterned after prehistoric pictographs and petroglyphs at a New Mexico archeological site that is now destroyed, leaving the tower as potentially the only surviving record of that early rock art.

The lower level houses a small bookstore and the upper floors offer visitors panoramic views of the Grand Canyon and Painted Desert. As visitors climb the steps, they are surrounded by murals that tell the stories of local Native Americans tribes.

GCA said preserving the Watchtower is critical, as water leaks damaged the tower and the murals painted inside. GCA said the leaks are fixed, but repairs are needed to preserve damaged murals and to guarantee the Watchtower remains open to the public.