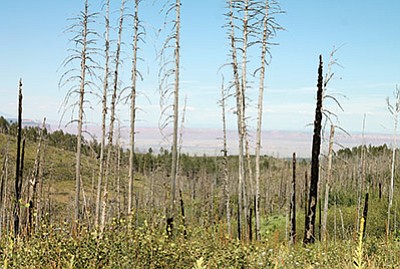 GRAND CANYON, Ariz. - On June 15, an amendment to block the creation of new national monuments, including the Grand Canyon Watershed in Arizona, Utah and several other states, was passed during a U.S. House Interior Appropriations Committee mark up. The amendment will now be officially included in the Interior Appropriations Bill, which the house expects to vote on this summer. The amendment was adopted in a 27-22 vote.

U.S. Congressman Paul A. Gosar, (R-Prescott) and Rep. Chris Stewart (R-Utah) released a statement after the House Appropriations Committee passed the Gosar-Stewart amendment saying the amendment is one step closer to blocking the proposed Grand Canyon Watershed and Sedona Monuments in Arizona and Bears Ears National Monument in Utah.

The amendment also prohibits the president from designating new national monuments under the Antiquities Act in other counties, where they say there is significant local opposition.

"Local communities deserve to have their voice heard before an authoritarian swipe of the pen bars them from even more land. A unilateral declaration of the nearly two million acres in the Grand Canyon Watershed as a new National Monument would kill jobs, undermine 4FRI and seize private water rights," Gosar's statement said. "Additionally, this overreach will erode the extensive cooperation and success that federal and state land management agencies in Arizona have achieved to date. The Antiquities Act has been significantly abused by this rogue president and today the House Appropriations Committee took bold action to prevent future executive land grabs throughout the country."

Stewart said this amendment is critical because of rising speculation that President Barack Obama plans to designate Bears Ears as a national monument in Utah.

"With the passage of this amendment, we are one step closer to preventing any president from creating new national monuments in Utah and in other areas where there is strong opposition. I am a strong supporter of preserving our national treasures, but when dealing with such huge areas of land - like has been proposed with Bears Ears - I believe we must have local and congressional input. Using the Antiquities Act as a political weapon is bad policy and furthers the distrust that exists between Americans and the federal government," Stewart said.

In Arizona, the Gosar-Stewart amendment prohibits the designation of any national monument under the Antiquities Act in Coconino, Maricopa, Mohave and Yavapai counties. Designations would still be allowed in these counties if authorized by Congress and signed into law by the president.

Advocates for the monument have requested 1.7 million acres surrounding the Grand Canyon designated as a national monument.

According to Grijalva, the proposed Greater Grand Canyon Heritage National Monument Act would protect 1.7 million acres in the canyon's watershed, prohibiting mining and other natural resources development. It would also make permanent a current 20-year moratorium on uranium mining that was imposed by the Interior Department. The 1.7 million acres proposed for monument designation consists of acreage that is part of the moratorium area as well as part of the North Kaibab National Forest.

The Center for Biological Diversity, an environmental group that has been a proponent of the monument's designation from its conception, said monument designation would provide habitat for endangered animal species and contains distinctive and unique ecological treasures, including southwestern old-growth ponderosa pine forests and remote grassland ecosystems. The Center also said the acreage is important in facilitating migration and survival of large mammals like mule deer and pronghorn and is a valuable water source for Grand Canyon's South Rim springs.

Katie Davis, public lands campaigner at the Center, said if monument designation must be approved by Congress, that could take much longer.

"I can't say for sure, I don't think it would be a permanent roadblock but I know if things were to go through Congress they would move much slower," she said. "We unequivocally do not support any amendment that would take away the ability of the president under a long standing law (the Antiquities Act) to preserve and protect some of our most important natural treasures and landscapes."

According to the press release from Gosar, Arizona has 18 national monuments, more than any other state, with around 18 percent of the land in Arizona being privately held.

Opponents of monument designations under the Antiquities Act claim monuments typically have significant negative consequences that affect grazing rights, water rights and other land management activities and said it has the potential to change rules on hunting, grazing, logging, recreation, private and state inholdings, leases and commercial uses.

Additionally, opponent say the proposed 1.7 million acre designation would be a land grab and could undermine the Four Forest Restoration Initiative (4FRI) program and make Arizona more vulnerable to wildfires.

"We simply don't know what, if any, management or other activities might be limited if the area were to be designated a national monument. That would depend on the specific proclamation and the management plan that would be developed for the monument," Banks said.

In 2015 the town of Tusayan officially opposed the creation of a Grand Canyon Watershed National Monument. Council members were concerned on impacts the monument could have on the town and surrounding lands and said there were too many unanswered questions that have been raised by stakeholders. Another concern is how a national monument designation would impact future residential development for the town.

"The town's concern, primarily would be the impacts it would have on the town's development plan, specifically as it applies to housing concerns," said Eric Duthie, Tusayan town manager. "No one could explain to us what that impact, definitively, would be. With this legislation it gives us some assurance that the town of Tusayan will be able to continue its residential development without the necessity to be impacted by any potential monument."

The town of Fredonia passed a similar resolution opposing the designation. The resolution said the town was concerned impacts from the monument would force business owners to close three businesses and impair other small independent businesses. The town also said they expected reduction or extinction of local ranching efforts and loss of recreation and tourism in the area.