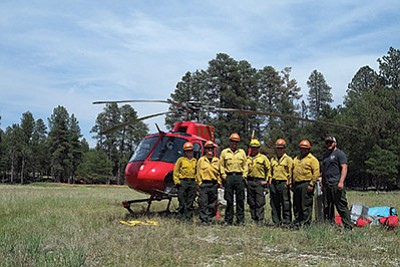 The Grand Canyon Helitack Crew at the Jack Fire outside of Flagstaff. Loretta Yerian/WGCN

GRAND CANYON, Ariz. - With fire season lighting up acres across the Southwest the Grand Canyon Fire and Aviation crew will spend the rest of fire season trekking across the U.S. to help put out wildfires.

In the last several weeks Grand Canyon's Helitack crew (GCH) responded to wildfires in both Arizona and New Mexico. The first fire the crew responded to this year was the Coyote Fire in Guadalupe National Park in Texas and New Mexico. They also helped with the Jack Fire in the Coconino National Forest off Lake Mary Road in Flagstaff and Dog Head Fire near Albuquerque, New Mexico.

As an interagency resource used by federal agencies, including the National Park Service (NPS) and U.S. Forest Service, the GCH responds to wildfires around the country.

When the GCH crew is on a fire assignment they are prepared to be out for at least two weeks. Assignments can last up to 21 days. Fire crews are self-sufficient and stay at the fire's location if alternative accommodations are not available.

On June 3, GCH departed from the Helibase at Grand Canyon National Park (GCNP), responding to the Jack Fire.

When responding to fires, the helitack crew has a multifold mission; they fly aerial reconnaissance of the area for fire managers, seek out and approve helispots, perform aerial ignitions, respond to medical emergencies and transport ground crews and fire managers. Crew members are trained firefighters and many, if not all crew members are certified EMTs. As firefighters in aviation the NPS helitack is also trained in shorthaul operations to support search and rescue missions.

In order to be able to land within fire areas, helitack crews fly reconnaissance missions and seek out helispots that meet certain criteria ensuring it is safe for the aircraft and crew to land.

"We are allowed to land anywhere once, with certain approvals, but if we're going to go back into that spot we need to designate it as an approved helispot," said Marcos Escobedo, squad leader for GCH. "We have a bunch of crews out there working, so in order to provide support for them - if we want to do crew shuttles - that type of thing, we need to be able to provide that support."

Recon missions allow fire managers to follow the progress of ground crews and the fire itself.

The PSD, also known as ping pong balls, are designed with Potassium permanganate, a purplish colored crystalline solid that is noncombustible but will accelerate the burning of combustible material. The PSD is injected with ethylene glycol to create a chemical reaction before being dropped from the helicopter and igniting seconds after hitting the ground.

Aerial ignition allow fire to be used in hard to reach and sometimes impossible to reach areas of the forest and allow fire managers to connect fire lines. On June 10, GCH operators dropped PSDs in areas around the Jack Fire. The operation took almost two hours with pilots and operators making slow, steady lines of fire on the landscape.

"We put the PSD machine into the aircraft and go through appropriate briefing and make sure that our window that we want to burn is a good time - for the fire and make sure all the correct personnel is informed," Escobedo said. "The machine just drops the balls."

During aerial ignitions, a firing boss is on board to relay to the pilot where the fire needs to be ignited, a PSD operator then releases the balls. The crew carries around 6,000 balls and has the option of how fast or slow balls are dropped, which Escobedo said depends on how active the fire needs to be.

At the Jack Fire, GCH provided a six man crew in addition to a contracted pilot and helicopter mechanic. When they are not assigned to a fire, the crew practices training and goes through a response checklist.

"We have certain loads ready to go for any scenario," Escobedo said. "If we get an initial attack then those people are going to go on board with the designated equipment.....same with medical loads."

At five minutes to two o'clock the crew takes what they call 'five at two," where they take a few minutes to step back and assess situations, talk about weather conditions and make sure they are not overlooking potential hazards. Escobedo said this helps them stay alert and be actively prepared.

"Idle hands are the devils playground," he said.

About the Grand Canyon Helitack crew and interagency operations

The GC Helitack Crew staffs two helicopters. One is contracted to remain at the park and be used in the event of a search and rescue, fighting fires in the Canyon and utility work. The other, for 90 days, starting May 1, is used for interagency fire operations.

To ensure their responsibility to Grand Canyon remains a priority, crew members are rotated between responding to fires and working the Canyon operation. Five to seven people are on the road while two to six people remain at the Grand Canyon Helibase. Grand Canyon's aviation department also works closely with other national and state agencies.

According to Jager, fire operations and search and rescue pick up during the summer for the helitack crews.

"It gets really busy around fire season," Jager said. "We try and always have one helicopter in the park for park missions.

If the helicopter in the park happens to be on a mission while the second helicopter is at a fire, co-operators like Department of Public Safety (DPS) can respond to calls.

"It doesn't happen very often but that is part of our working relationship and interagency operations," Jager said.

With fires being unpredictable, both fixed wing aircraft and helicopters from multiple agencies can be called in to make sure operations have all available firefighting assets.

"In fire we try to train people up, so there is constant movement," Escobedo said. "It's a really great thing because you have that attitude that you're not going to stay stagnant. We are constantly relying on each other to learn more, to do more and be valuable to the crew."

Busy above Grand Canyon: a look at Grand Canyon Helitack
Airspace intrusions pose hazards for aerial firefighting
Eye in the sky: fire crews deploy drones to combat wildfires
Cross Fire at 960 acres
Getting the drop on wildfires: Kaibab Forest helitack gets a jump on wildfire season