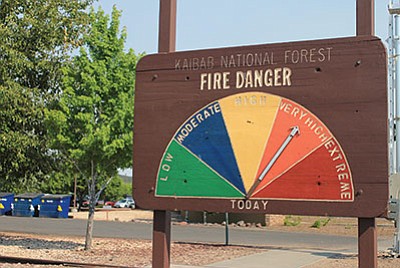 A sign near the Grand Canyon Railway Depot lets people know that fire danger on the Kaibab Forest is very high. Wendy Howell/WGCN

Under the restrictions, fires, campfires, charcoal, coal and wood stoves are allowed in developed campgrounds only, which are managed by concessionaires or have campground hosts. The restrictions also limit smoking to within enclosed vehicles or buildings or in developed campgrounds. Using a device that is solely fueled by liquid petroleum or LPG fuels that can be turned on and off is allowed in areas that are clear of flammable materials.

Fireworks are always prohibited on all National Forest lands. On the Prescott National Forest, Stage I restrictions will not allow shooting firearms because of drier conditions. However, this activity will be allowed on the other national forests.

The forests use fire restrictions to help prevent unwanted, human-caused fires and to limit the exposure of users during periods of dangerous fire conditions. Fire restrictions typically remain in effect until the forests receive significant precipitation, at which time they will be rescinded.

Forest officials would also like to remind forest users that building and maintaining a campfire on the national forest while under fire restrictions is a violation that carries a mandatory appearance in federal court. Visitors should use extra caution when recreating on all public lands during fire season.

More information regarding fire restrictions across the state is available at http://firerestrictions.us/az/.