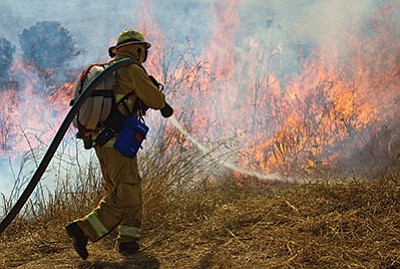 GRAND CANYON, Ariz. - The National Weather Service has issued a Red Flag Warning for June 15 for the Tusayan and North Kaibab ranger districts of the Kaibab National Forest, as well as other areas of northern Arizona, because of strong winds and low relative humidity.

The entire Kaibab National Forest, including the Tusayan and North Kaibab ranger districts, entered campfire and smoking restrictions, also known as Stage I fire restrictions, as of 8 a.m. June 15.

While these fire restrictions prohibit many instances of campfires on the forest already, the Red Flag Warning issued expands those prohibitions to include campfires in developed campgrounds.

For the duration of the Red Flag Warning, visitors to the Tusayan and North Kaibab ranger districts are advised to refrain from having a campfire, even in developed campgrounds.

A Red Flag Warning means that critical fire weather conditions are expected and that a combination of strong winds, low relative humidity and warm temperatures will create an increased potential for large wildfire growth. The campfire advisory for developed campgrounds remains in effect until the Red Flag Warning ends.

"Even though campfire and smoking restrictions are already in effect, it is important to make our visitors aware of Red Flag conditions," said Art Gonzales, fire staff officer for the Kaibab National Forest. "We are at very high fire danger, and Red Flag days only increase the threat that any wildfire start could become a large wildfire very quickly. If you are planning to visit northern Arizona, please be sure you know about the fire restrictions that are in place and that you are vigilant about preventing any fire starts."